In the coming months, we’ll begin to have truly cross-platform low-level graphics, with the ability to cross compile GPU-accelerated applications written in Zig from any OS and deploy to desktop, mobile, and (in the future) web.

I’ve been working on Mach Engine for about 4 months now, although it as a project is many years in the making, and I believe in the next 4-6 months we’ll have completion of the first key milestone: truly cross platform graphics and seamless cross compilation.

Today, I share only the first milestone: Mach engine core. I’ve been working on this for around 1 year now, and we’re close (maybe 4-6 months away) from completion: 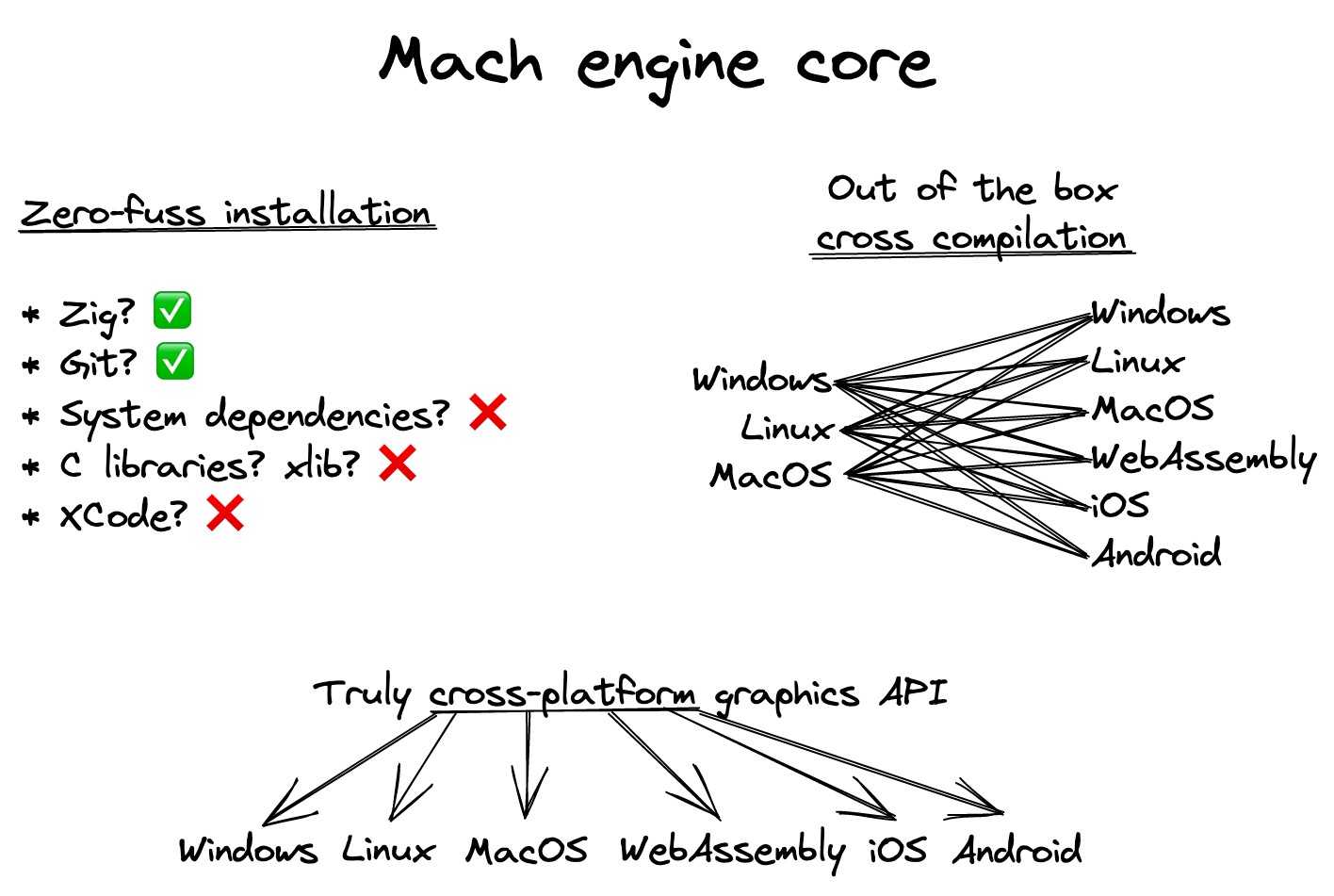 Only zig and git are needed to build from any OS and produce binaries for every OS. You do not need any system dependencies, C libraries, SDKs (Xcode, etc.), C compilers or anything else.

We’re able to achieve this thanks to two things:

Imagine a low-level, little to no overhead graphics API that unifies DirectX, Metal, Vulkan, and OpenGL (if no others are available):

This isn’t anything new: all modern engines provide this, Godot has been working towards this for years (and still is), and there exist abstraction layers for Vulkan over most of these APIs as well.

An API is only as good as the momentum behind it. What modern API can target the largest array of platforms with the most vendor backing?

One API that Apple, Microsoft, and Google can all agree on 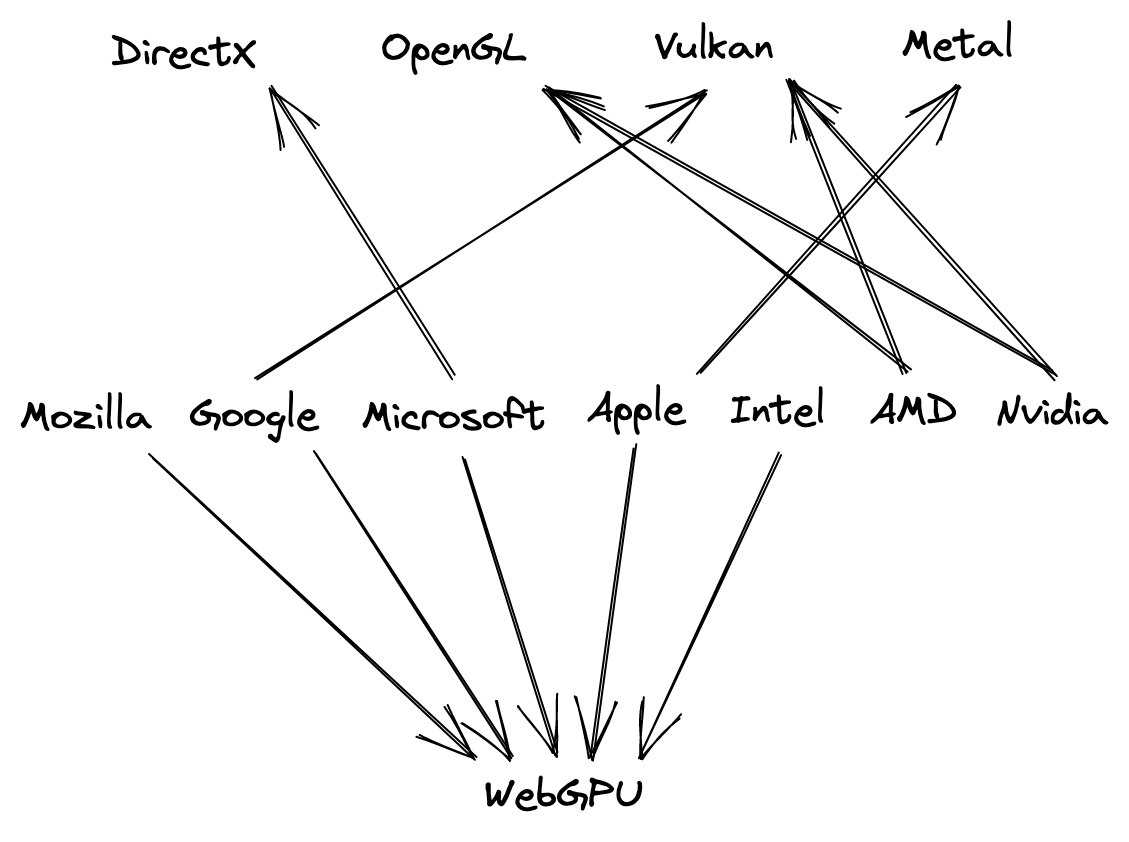 Outside the bounds of traditional graphics APIs there exists an attempt to provide a unified API across all platforms, WebGPU (not to be confused with the much older WebGL).

Mozilla, Google, Apple, and Microsoft all got together to build an abstraction layer over the modern graphics APIs - finding the common ground between Direct3D 12, Metal, and Vulkan - plus a safe way to expose that functionality in browsers.

The name WebGPU might lead you to believe that this is only for browsers, and that it may not be low-level or fast - but this really couldn’t be further from the truth.

Apple & Google’s role is what makes WebGPU unique, and why we chose it 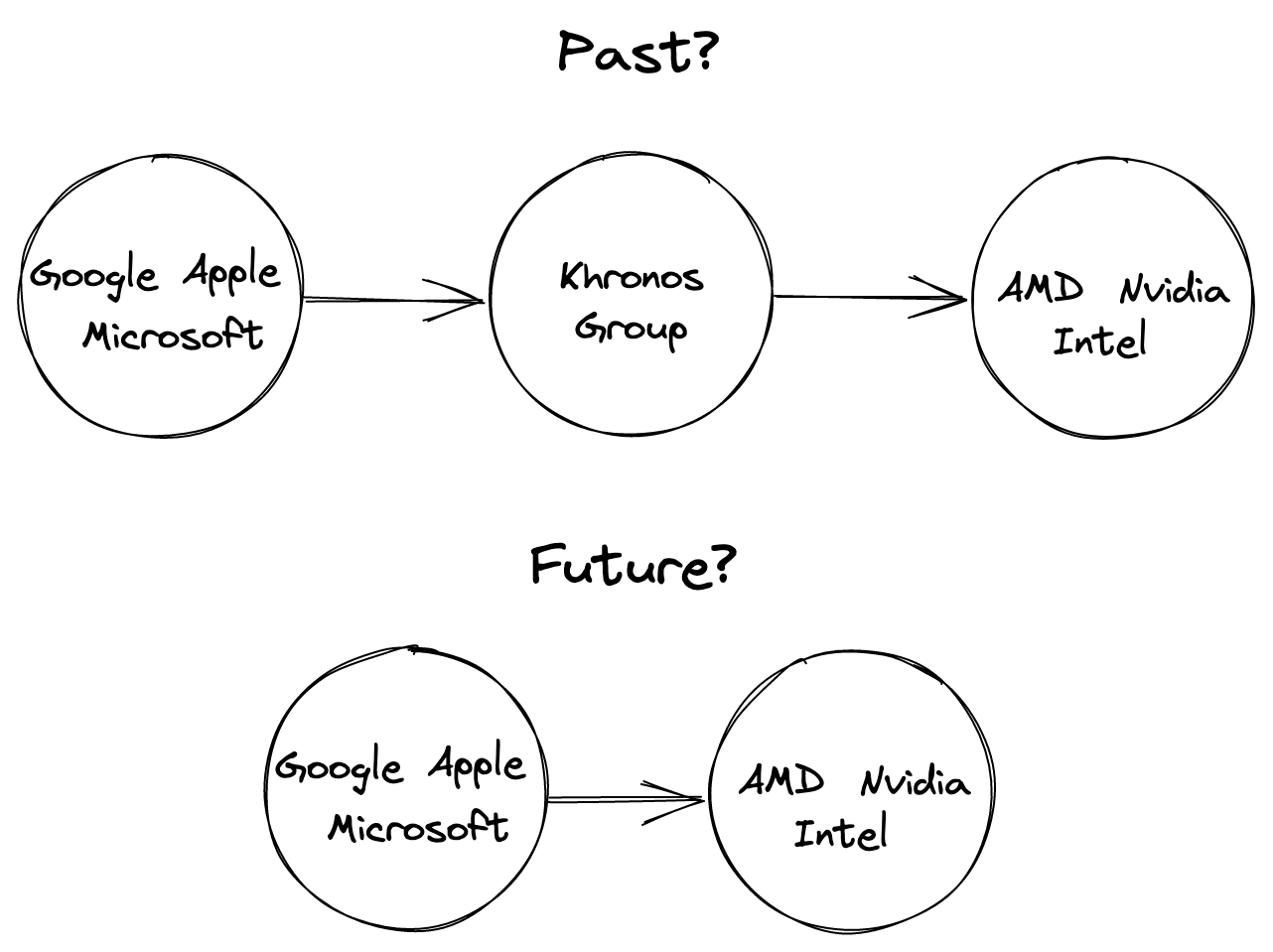 What is new about WebGPU in my view is the vendors playing key roles in its development, and the fact that it grew outside the Khronos Group.

Although abstraction layers over modern graphics APIs are nothing new - as Apple, Google, and Microsoft continue to get more into manufacturing their own hardware (it’s clear this is a strategic move for them) we should ask ourselves how this will change the landscape, and WebGPU is the first cross-vendor API to be produced by this new ecosystem.

What progress has been made so far on Mach Engine?

Today, we have cross-compilation of GLFW on all desktop OSs working out of the box with nothing more than zig and git:

All this to say, we’re really taking a holistic approach to achieve this.

I’m happy to report that a fair amount of progress on this front has been made. 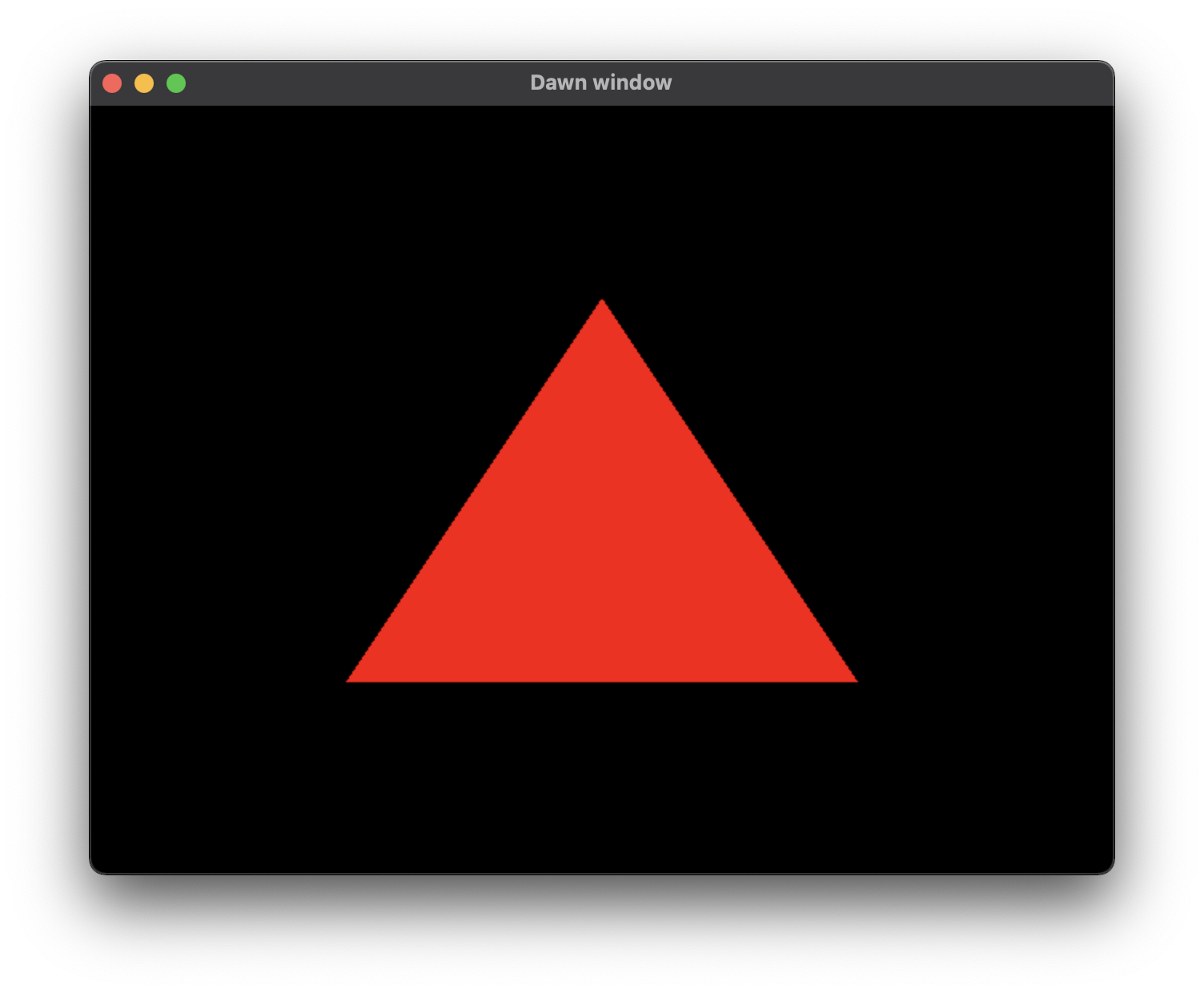 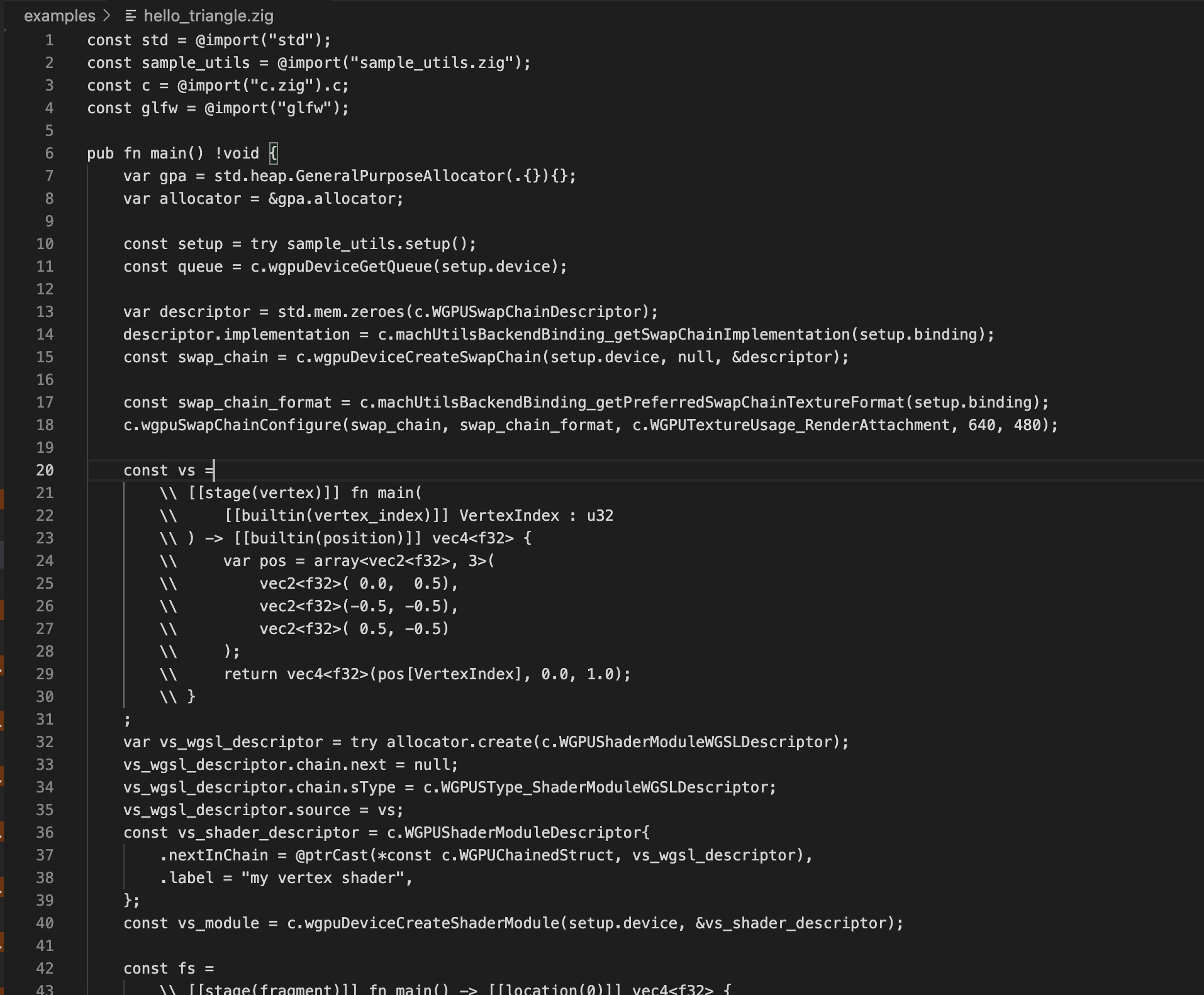 There are a few weeks of work to do before this can be merged and will be usable by others, please stay tuned for that.

After that will be development of idiomatic Zig bindings to the WebGPU C API which is shared between implementations such as Dawn and the Rust’s gfx-rs/wgpu-native implementation (we could theoretically switch between them at startup in the future, but we’ll probably stick with Dawn as it does not require a separate Rust toolchain and it would prevent out-of-the-box cross compilation.)

When will there be games, examples, etc.?

It’ll be a while because I am focusing purely on the groundwork first. It’s unlikely you’ll see anything with real demo value before later next year.

I’m sure that will be disheartening to hear - and may make you to think there’s nothing of substance here. I totally understand that view, but I hope you’ll stay tuned because I’m in this for the long haul and it’s not my first rodeo (I previously spent 4 years writing a game engine in Go, and have worked at a devtools startup for 7 years, with my biggest lesson from of those experiences being the importance of demos and examples.

Major developments will be posted here, as well as on Twitter @machengine.