In this article, we share empirical measurements from our experiments in using Postgres to index and search over 10,000 top GitHub repositories using pg_trgm on only a Macbook.

This is a follow up to “Postgres Trigram search learnings”, in which we shared several learnings and beliefs about trying to use Postgres Trigram indexes as an alterative to Google’s Zoekt (“Fast trigram based code search”).

We share our results, as well as the exact steps we performed, scripts, and lists of the top 20,000 repositories by stars/language on GitHub so you can reproduce the results yourself should you desire.

This article is extensive and more akin to a research paper than a blog post. If you’re interested in our conclusions, see conclusions instead.

We wanted to get empirical measurements for how suitable Postgres is in providing regexp search over documents, e.g. as an alterative to Google’s Zoekt (“Fast trigram based code search”). In specific:

During test execution, few other Mac applications were in use such that effectively all CPU/memory was available to Postgres.

We scraped lists of the top 1,000 repositories from the GitHub search API ranked by stars for each of the following languages (~20.5k repositories in total):

Cloning all ~20.5k repositories in parallel took ~14 hours with a fast ~100 Mbps connection to GitHub’s servers.

We found the amount of disk space required by git clone --depth 1 on these repositories to be a sizable ~412G for just 12,148 repositories - and so we put in place several processes for further reduce the dataset size by about 66%:

We concurrently inserted the entire corpus into Postgres, with the following DB schema:

In total, this took around ~8 hours to complete and Postgres’s entire on-disk utilization was 101G.

In our first attempt, we see the reported docker stats memory usage of the container grow up to 12 GiB (chart shows MiB of memory used over time): 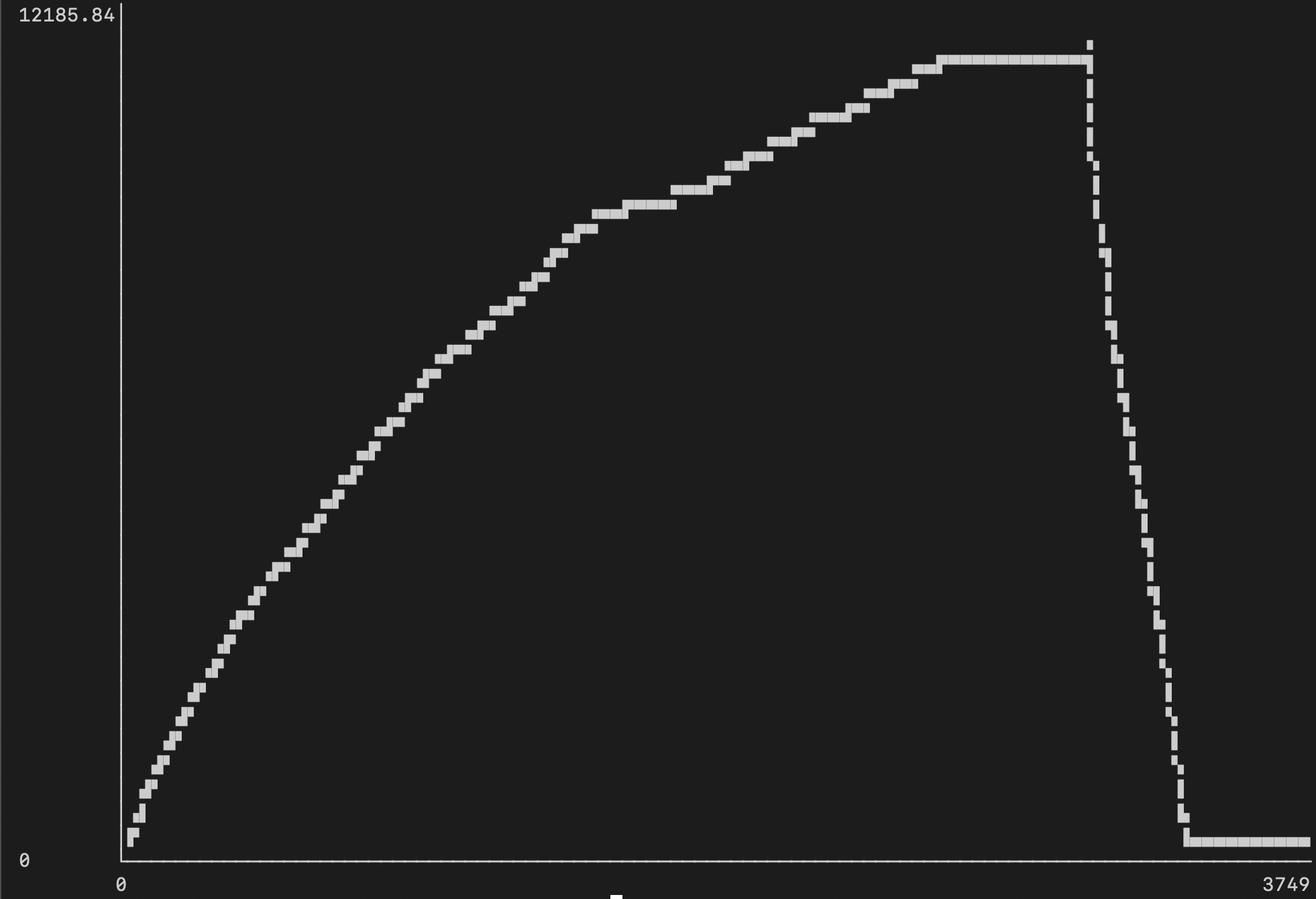 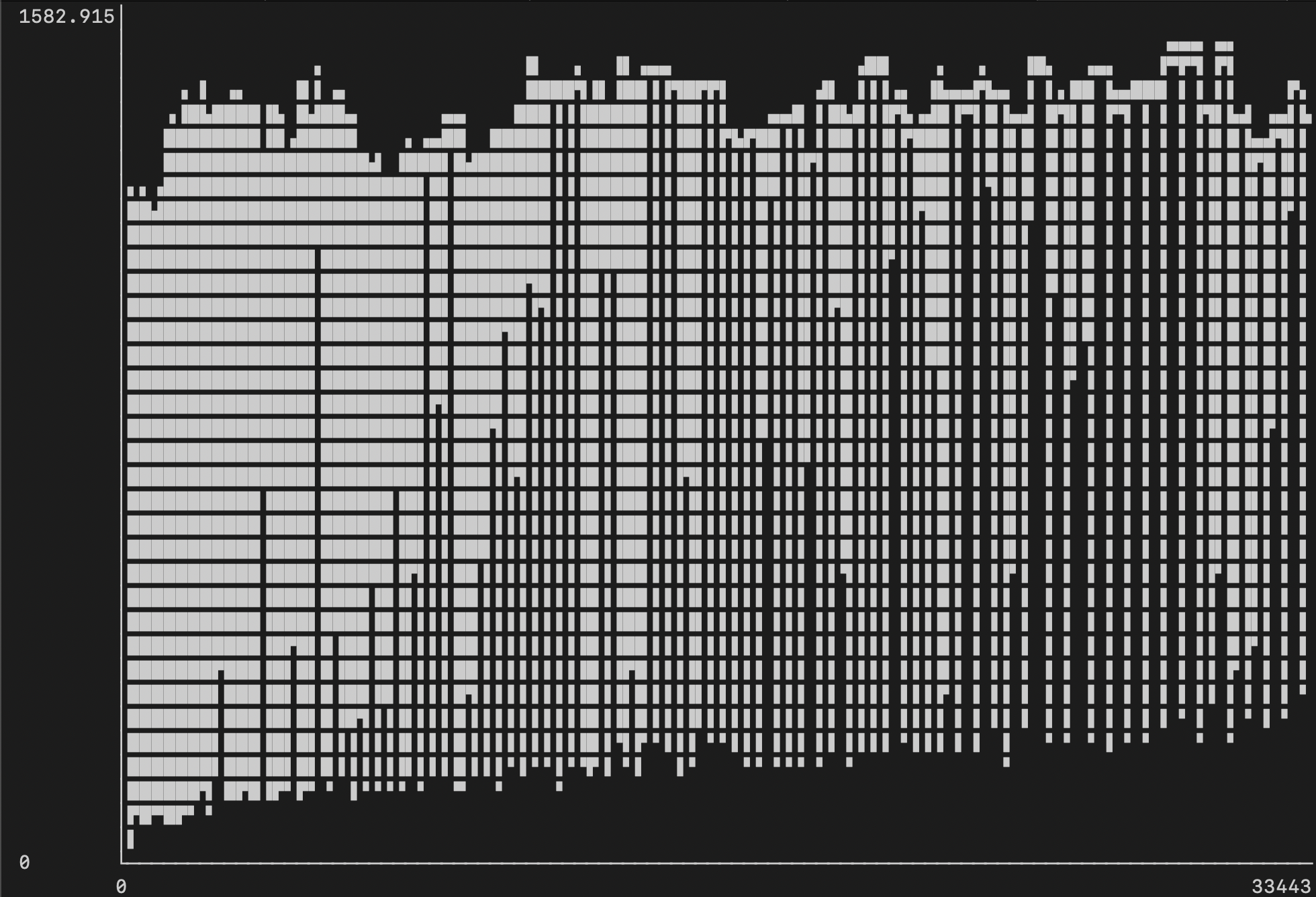 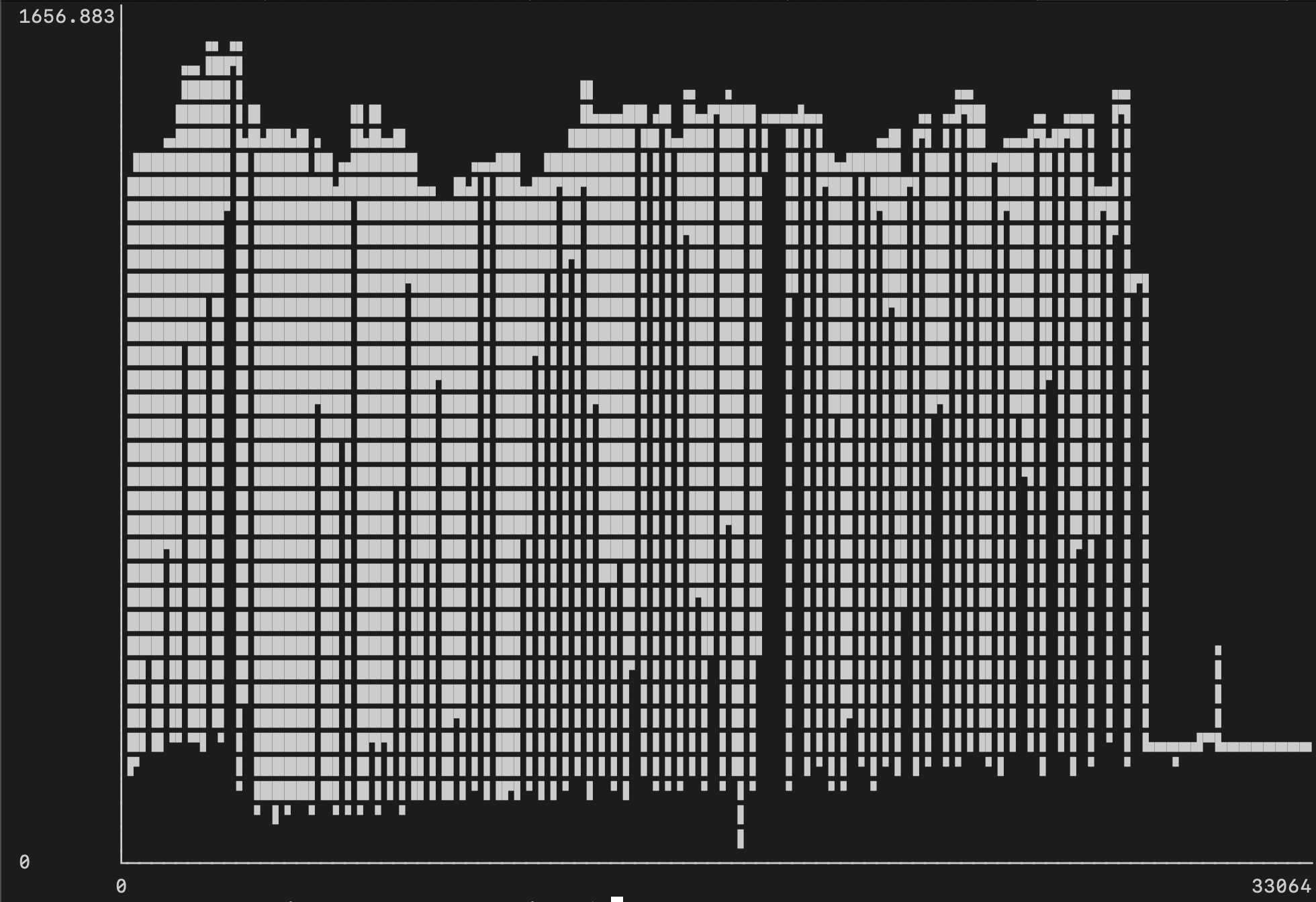 Postgres' Trigram indexing appears to be mostly single-threaded (at least when indexing a single table, we test multiple tables later.)

In our first attempt, CPU usage for the container did not rise above 156% (one and a half virtual CPU cores): 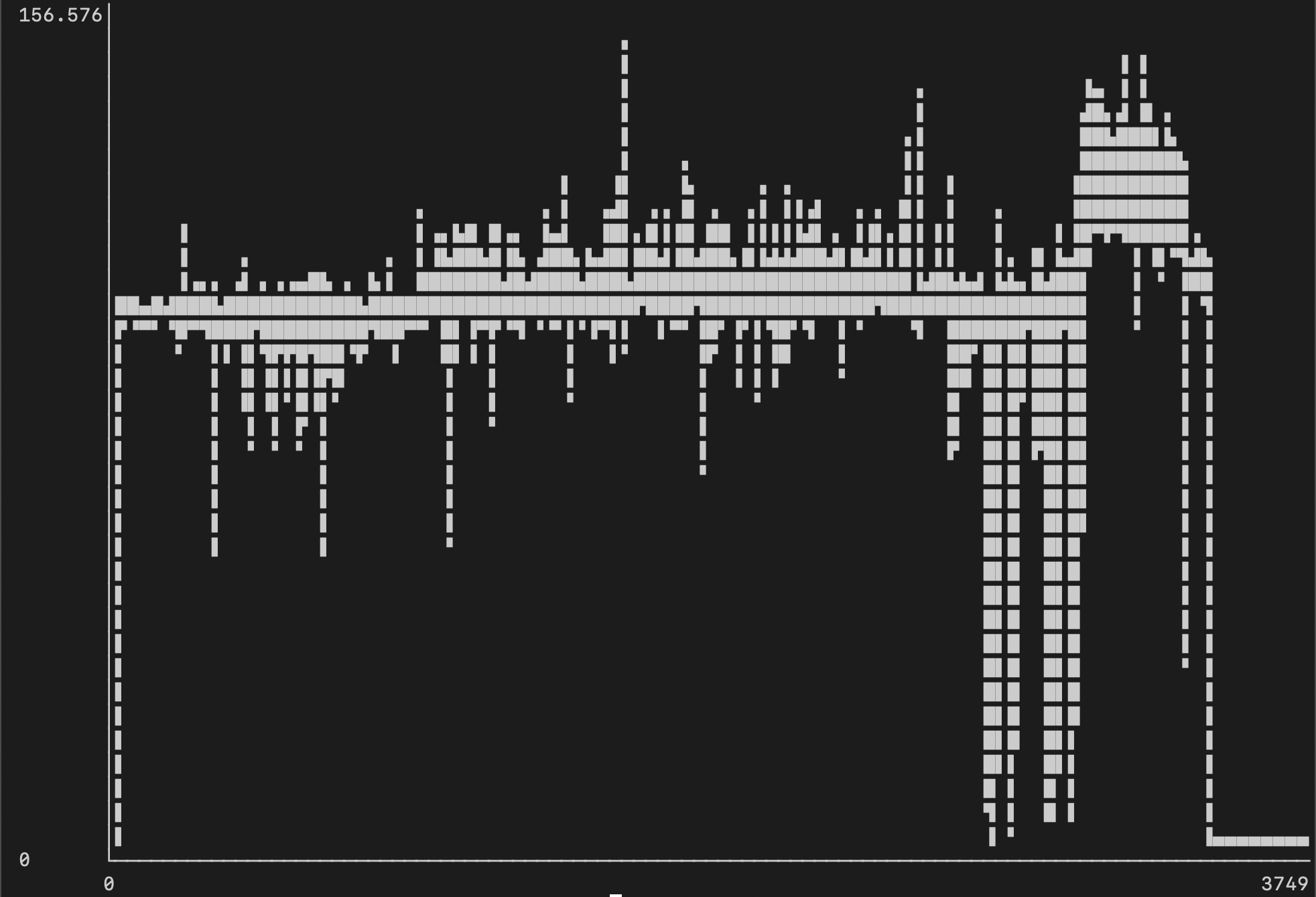 Our second attempt was around 150-200% CPU usage on average: 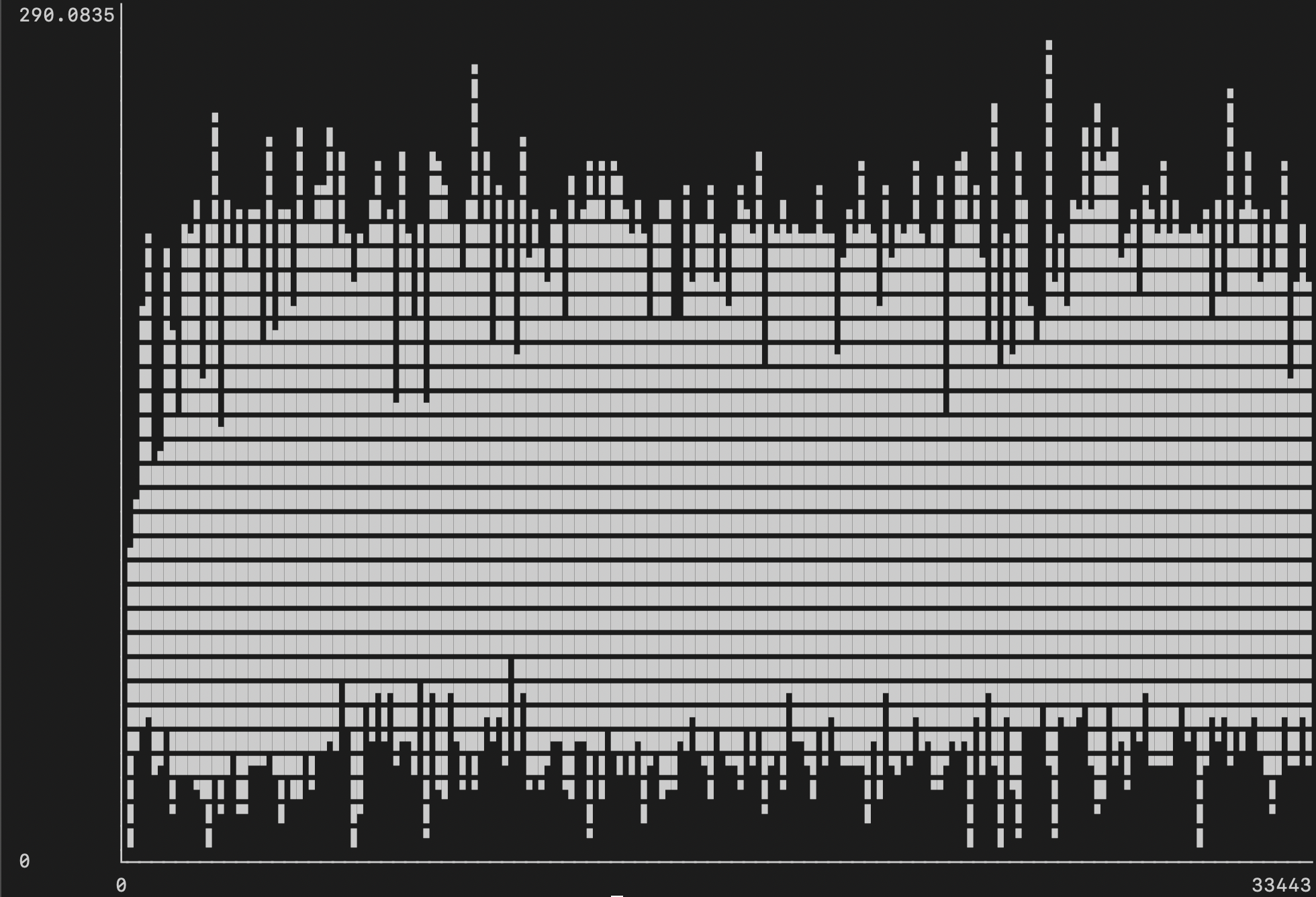 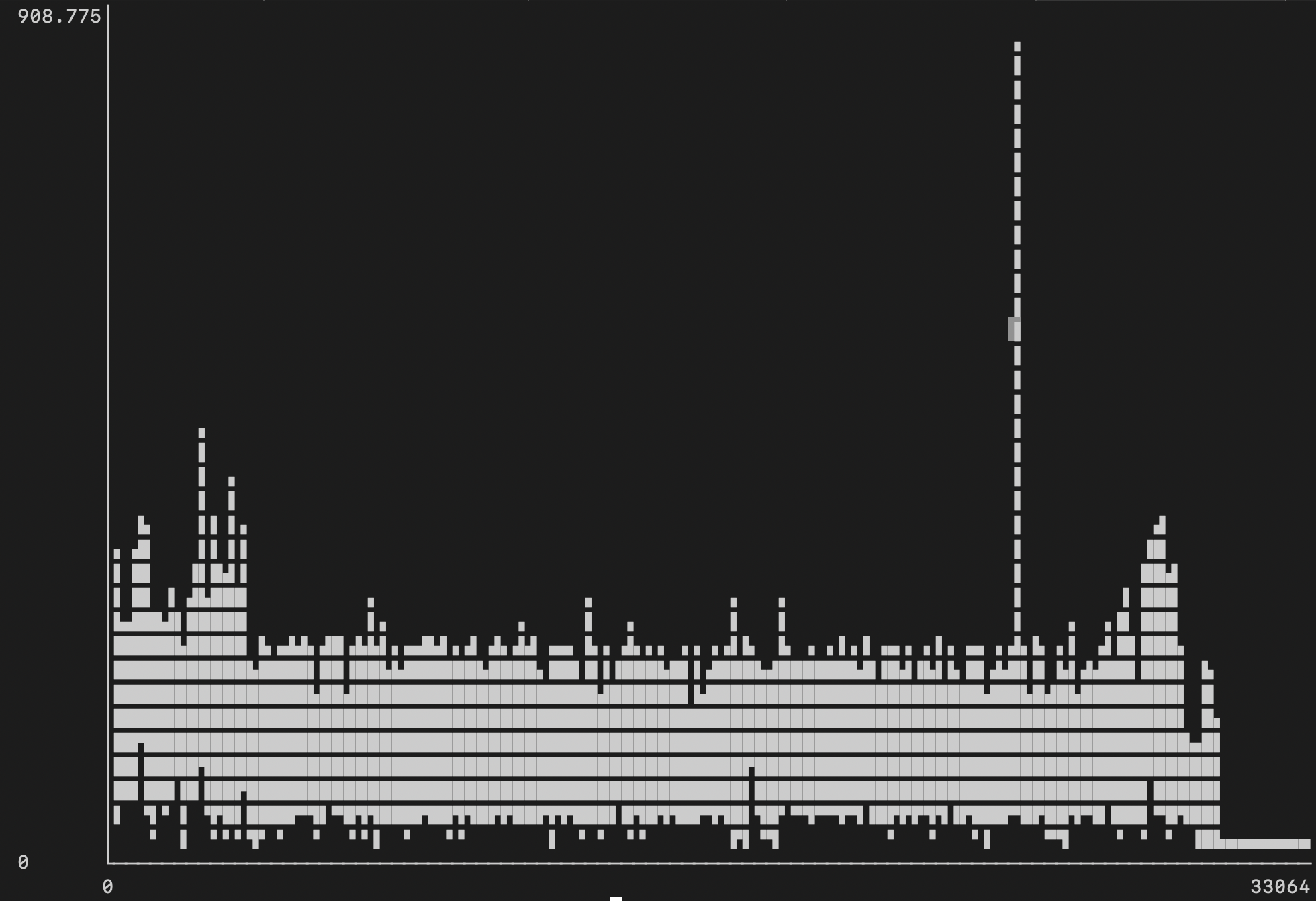 Addition made Feb 20, 2021: We ran tests using native Postgres as well (instead of in Docker with a bind mount) and found better indexing and query performance, more on this below. 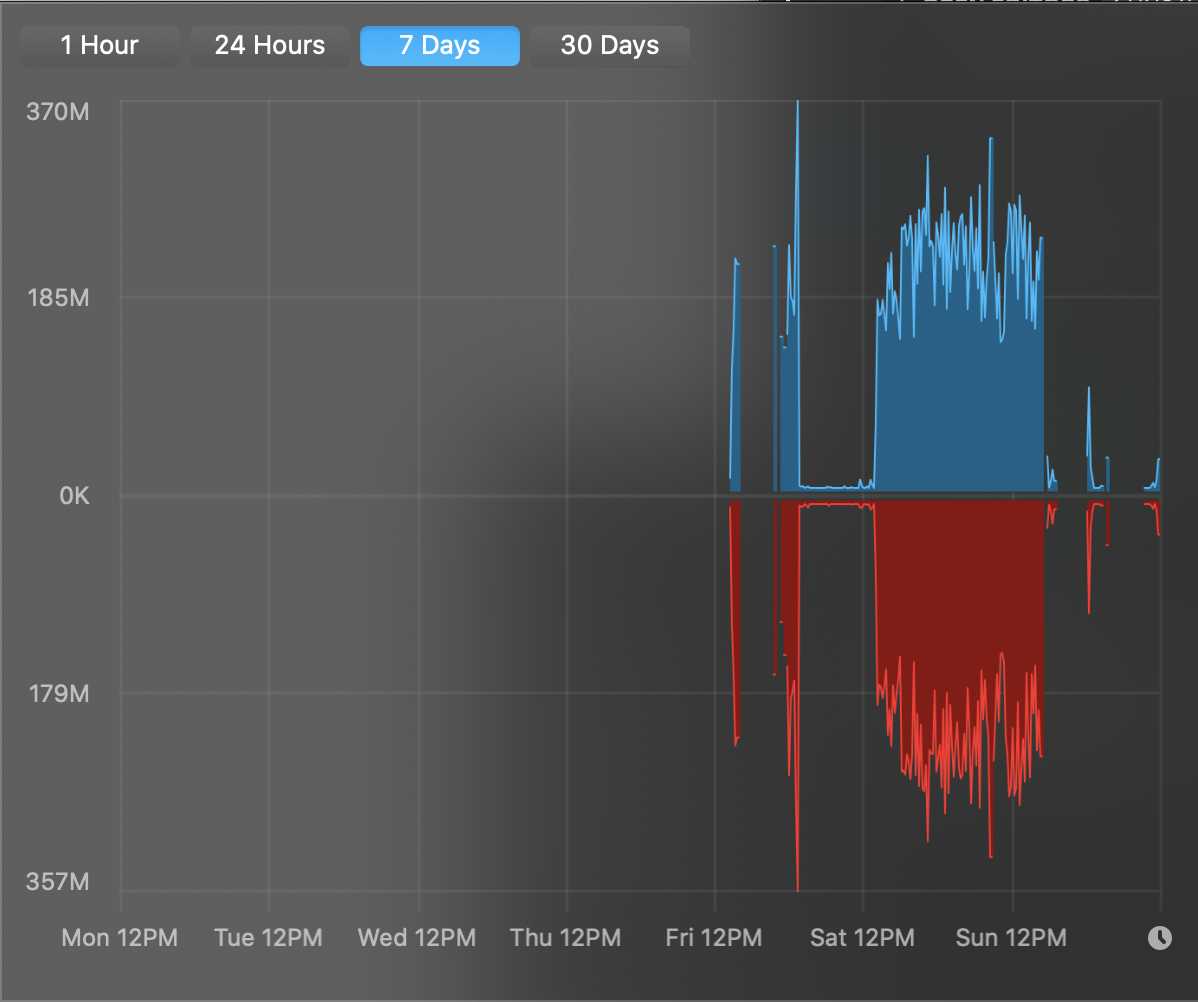 Before indexing, we find that all of Postgres is consuming 54G:

From an operational standpoint, it is worth noting that if Postgres is starting clean (i.e. previous shutdown was graceful) then startup time is almost instantaneous: it begins accepting connections immediately and loads the index as needed.

However, if Postgres experienced a non-graceful termination during e.g. startup, it can take a hefty ~10 minutes with this dataset to start as it goes through an automated recovery process.

In total, we executed 19,936 search queries against the index. We chose queries which we expect give reasonably varying amounts of coverage over the trigram index (that is, queries whose trigrams are more or less likely to occur in many files):

In total, we executed 19,936 search queries against the database (linearly, not in parallel) which completed in the following times:

The following scatter plot shows how 79% of queries executed in under 3s (Y axis, in ms), while Postgres’s query planner had planned them for execution in under 100-250ms generally (X axis, in ms): 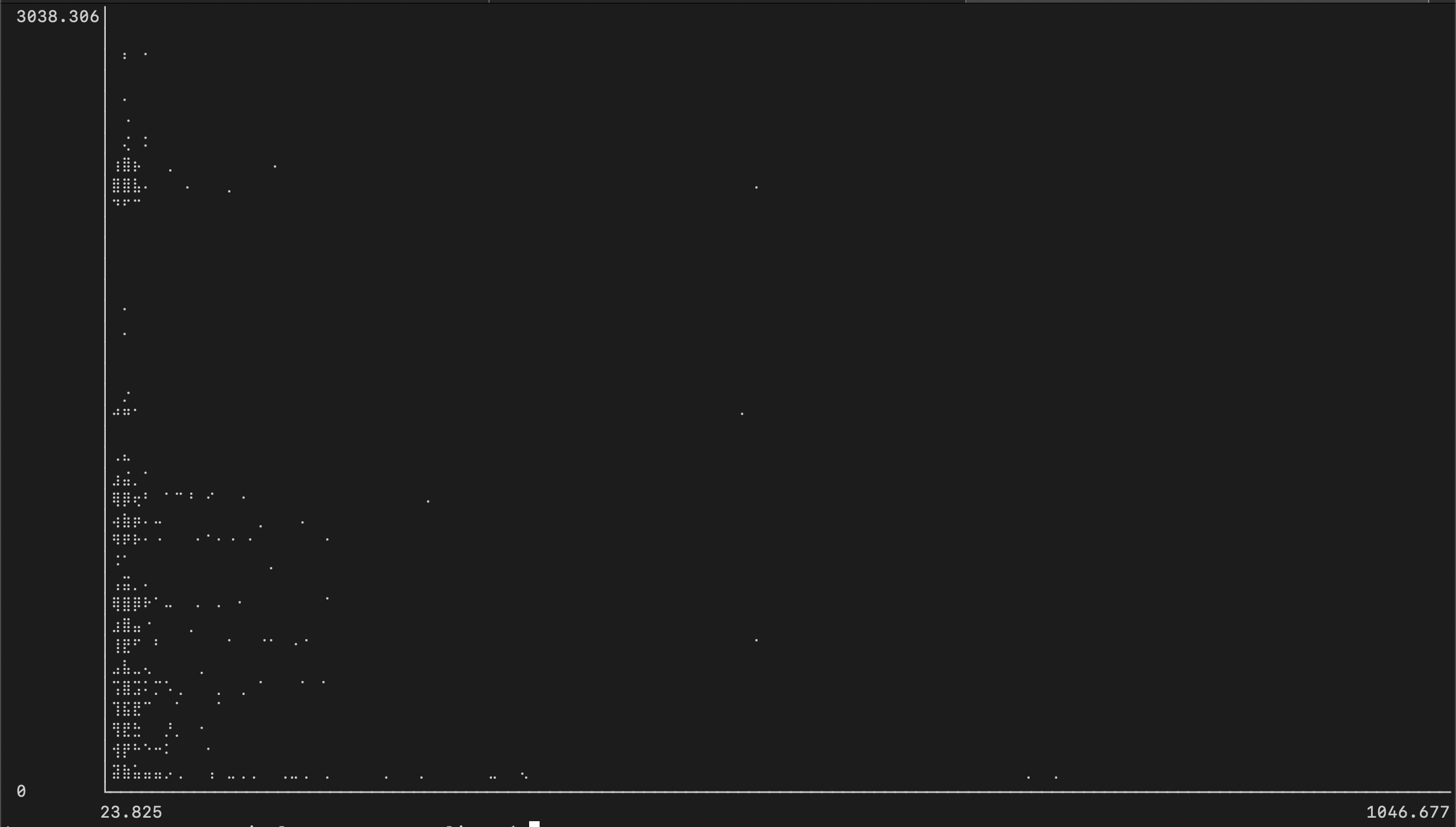 If we expand the view to include all queries, we start to get a picture of just how outlier these 21% of queries are (note that the small block of dots in the bottom left represents the same diagram shown above): 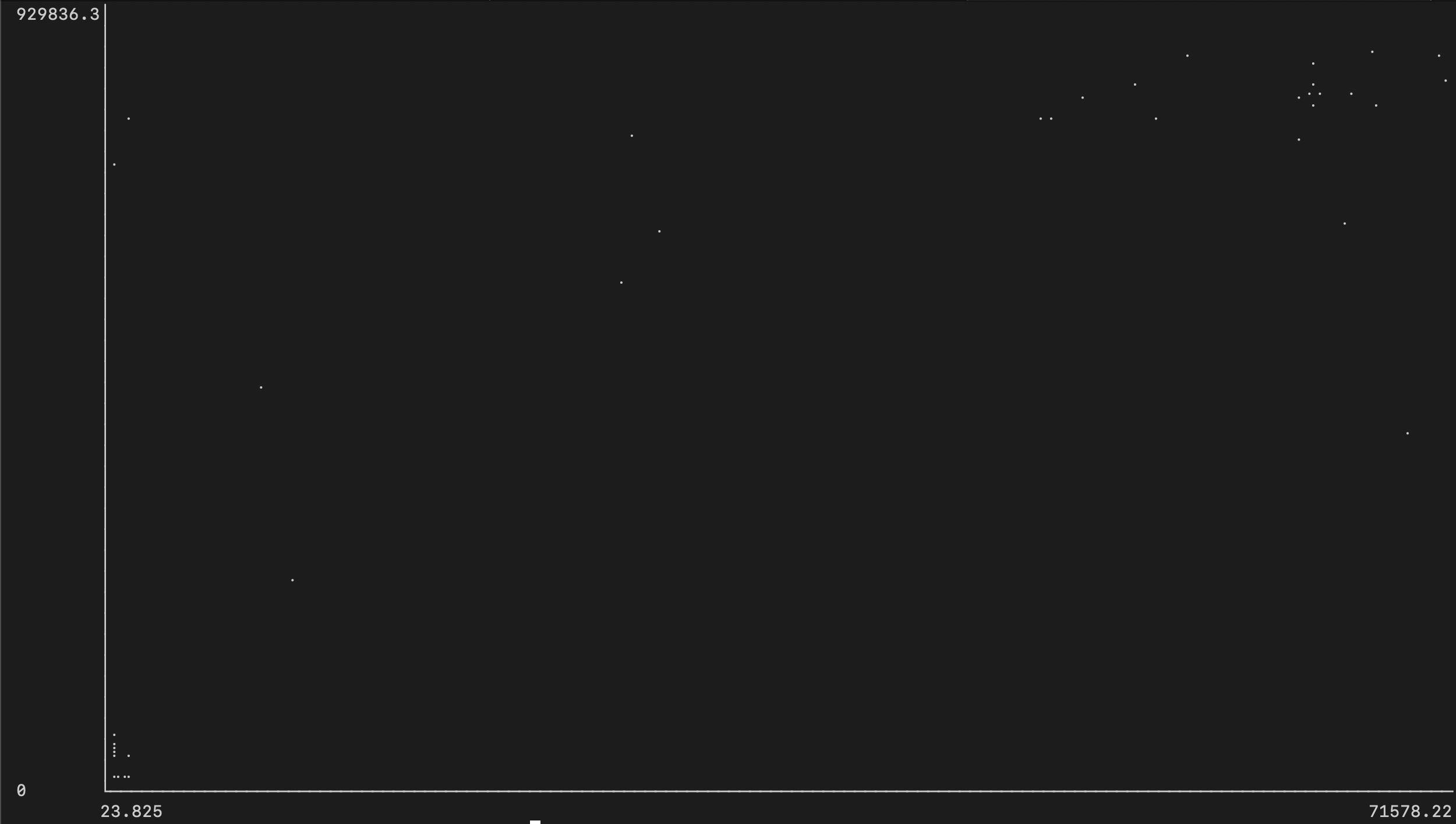 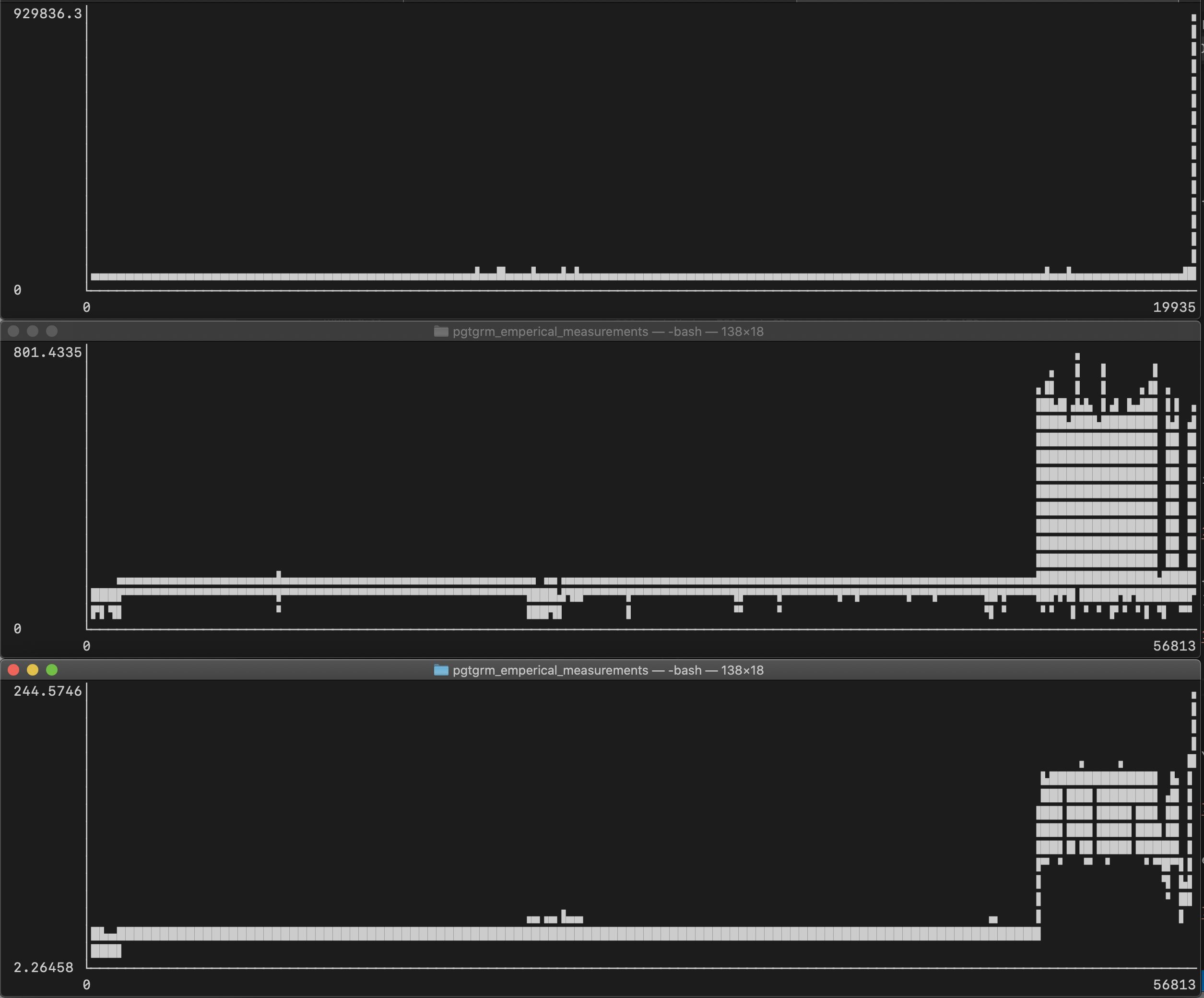 Notable insights from this are:

We suspect pg_trgm is single-threaded within the scope of a single table, but with table data partitioning (or splitting data into multiple tables with subsets of the data), we suspect better parallelism could be achieved.

If we plot the number of index rechecks (X axis) vs. execution time (Y axis), we can clearly see one of the most significant aspects of slow queries is that they have many more index rechecks: 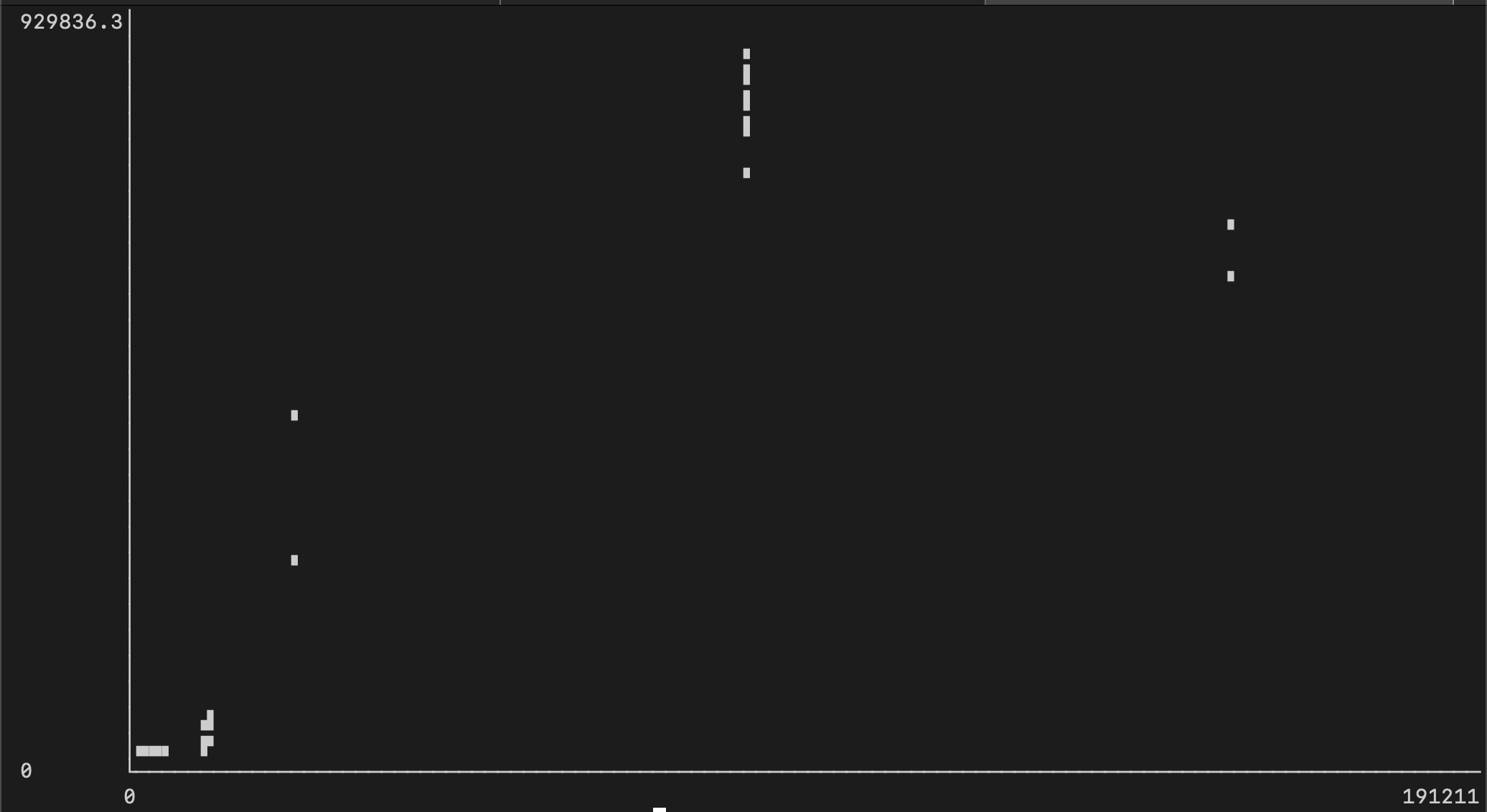 And if we look at the EXPLAIN ANALYZE output for one of these queries we can also confirm Parallel Bitmap Heap Scan is slow due to Rows Removed by Index Recheck.

Splitting up the search index into multiple smaller tables seems like an obvious approach to getting pg_trgm to use multiple CPU cores. We tried this by taking the same exact data set and splitting it into 200 tables, and found numerous benefits:

If indexing fails after 11-27 hours, as happened to us twice in the non-splitting approach, all progress is not lost. 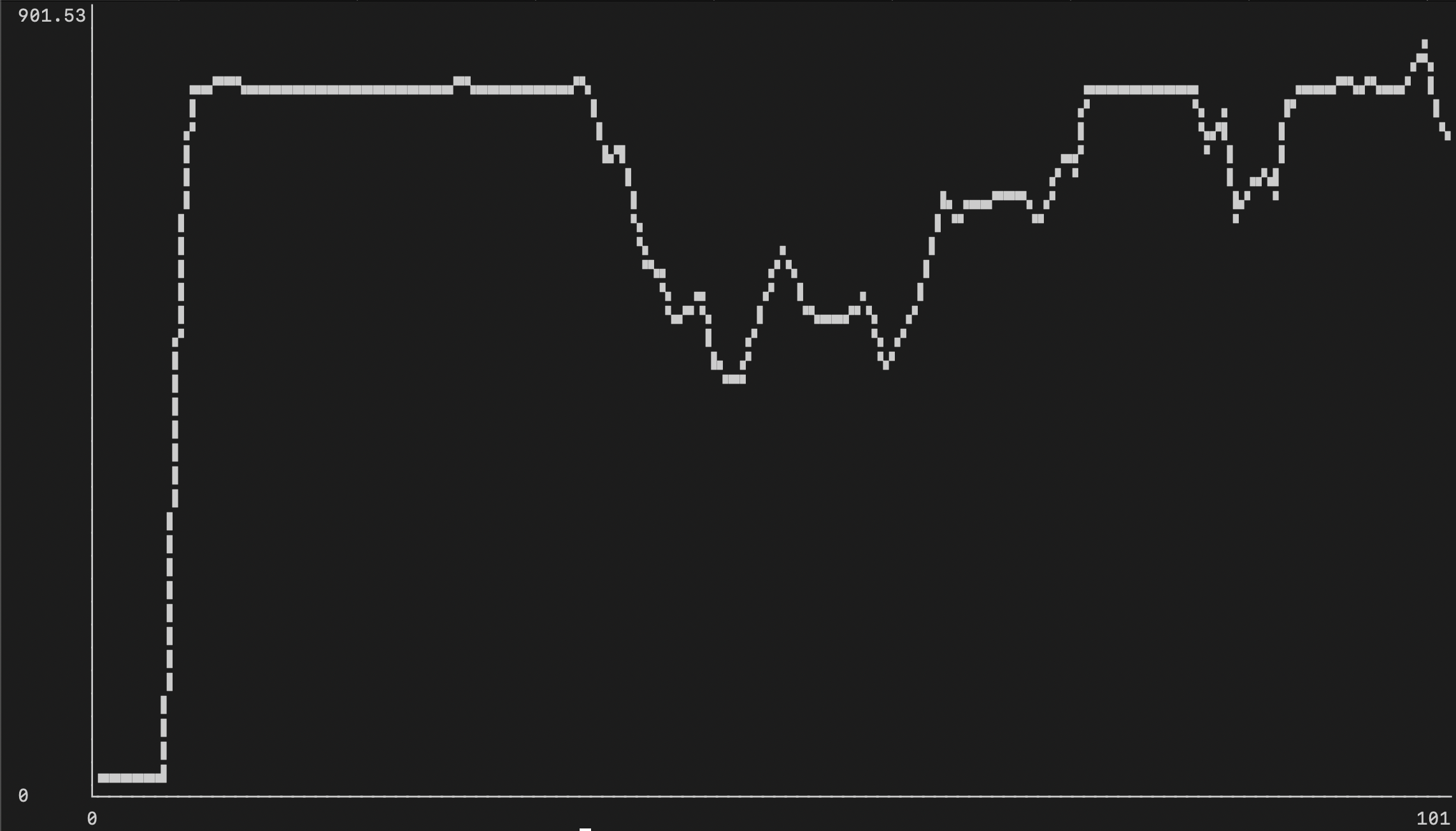 Unlike our first attempt which took 22 hours in total, parallel indexing completed in only 3h27m. 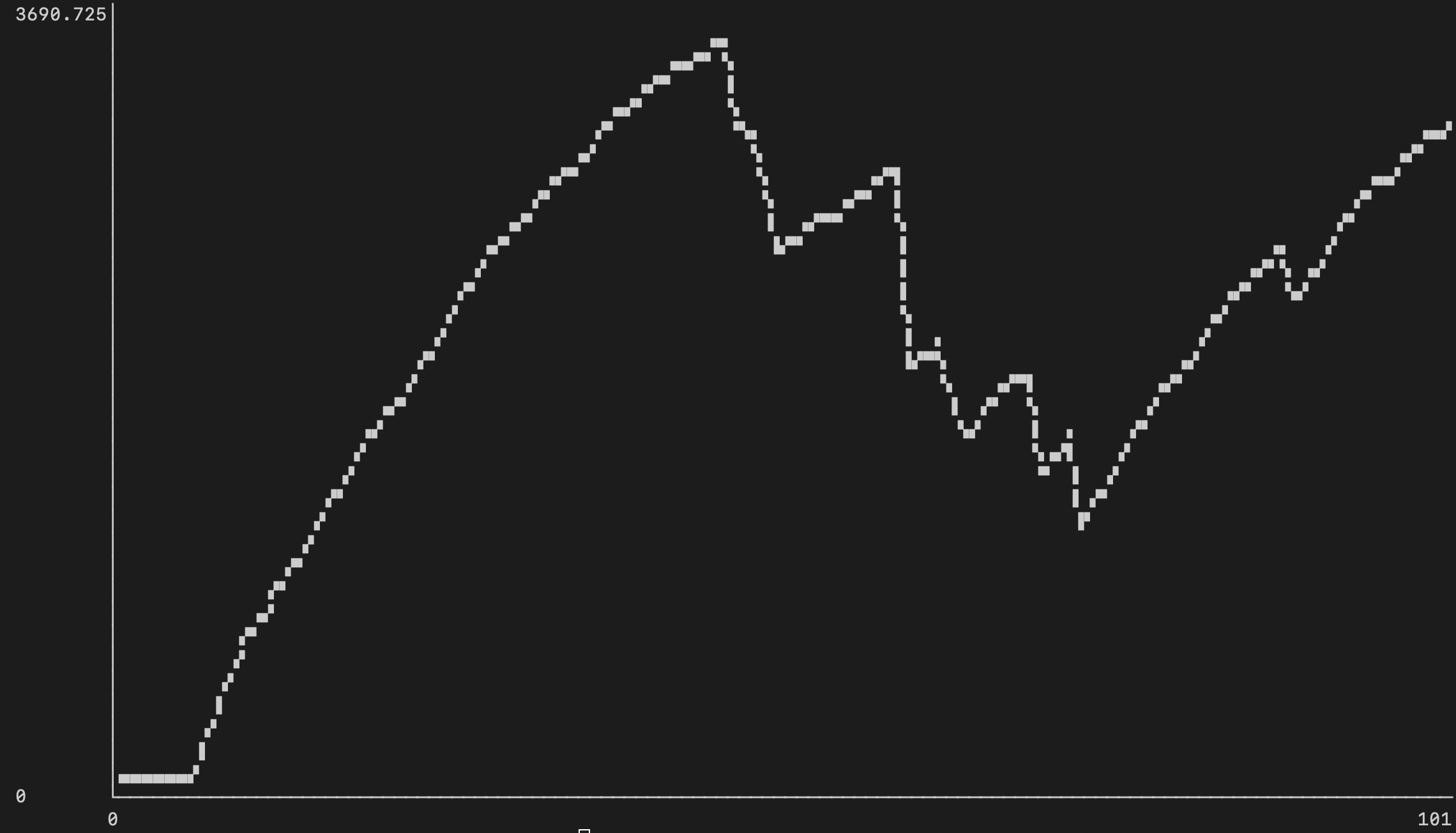 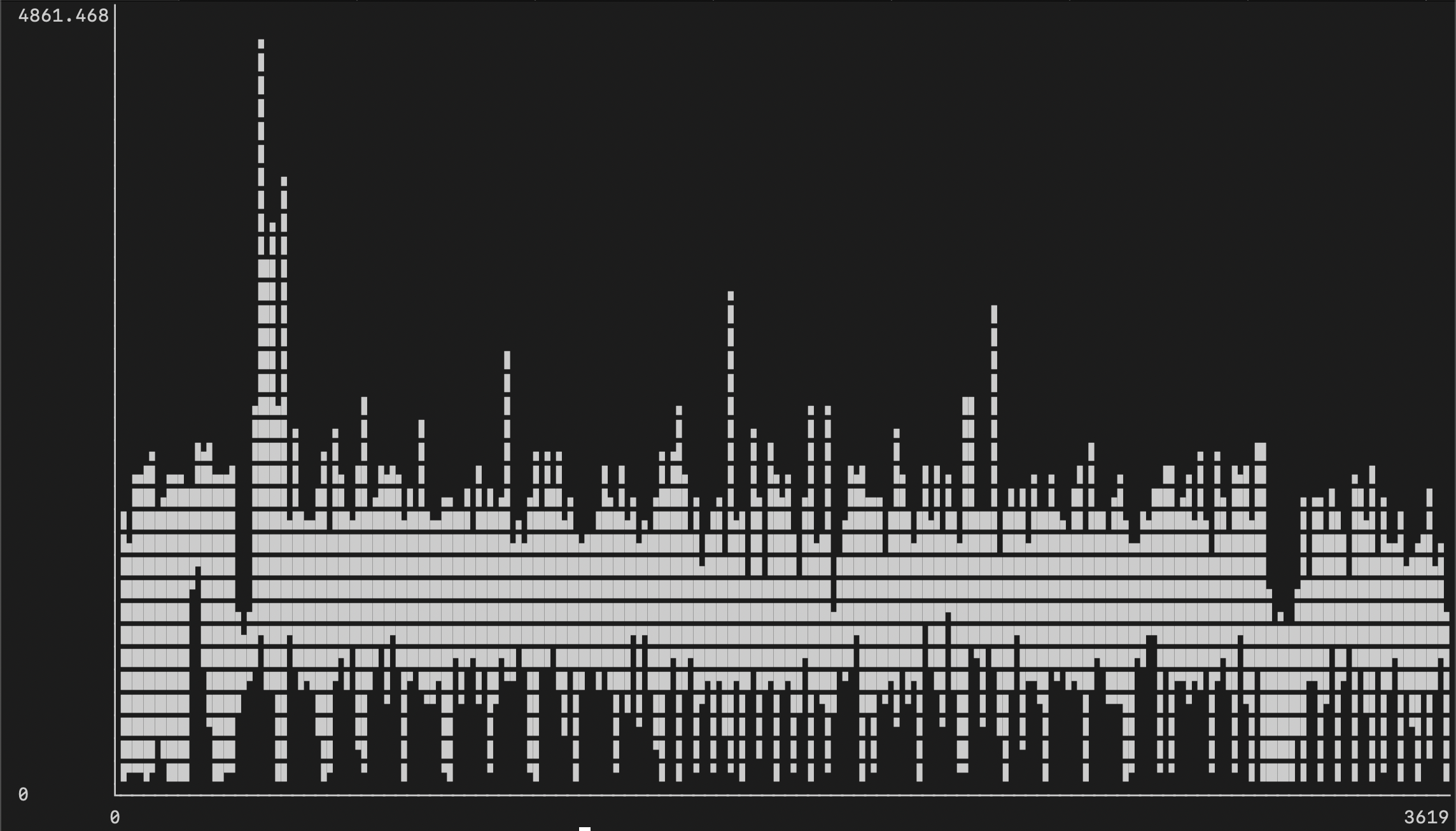 Similarly, we saw memory usage average around ~380 MiB, compared to only ~42 MiB before: 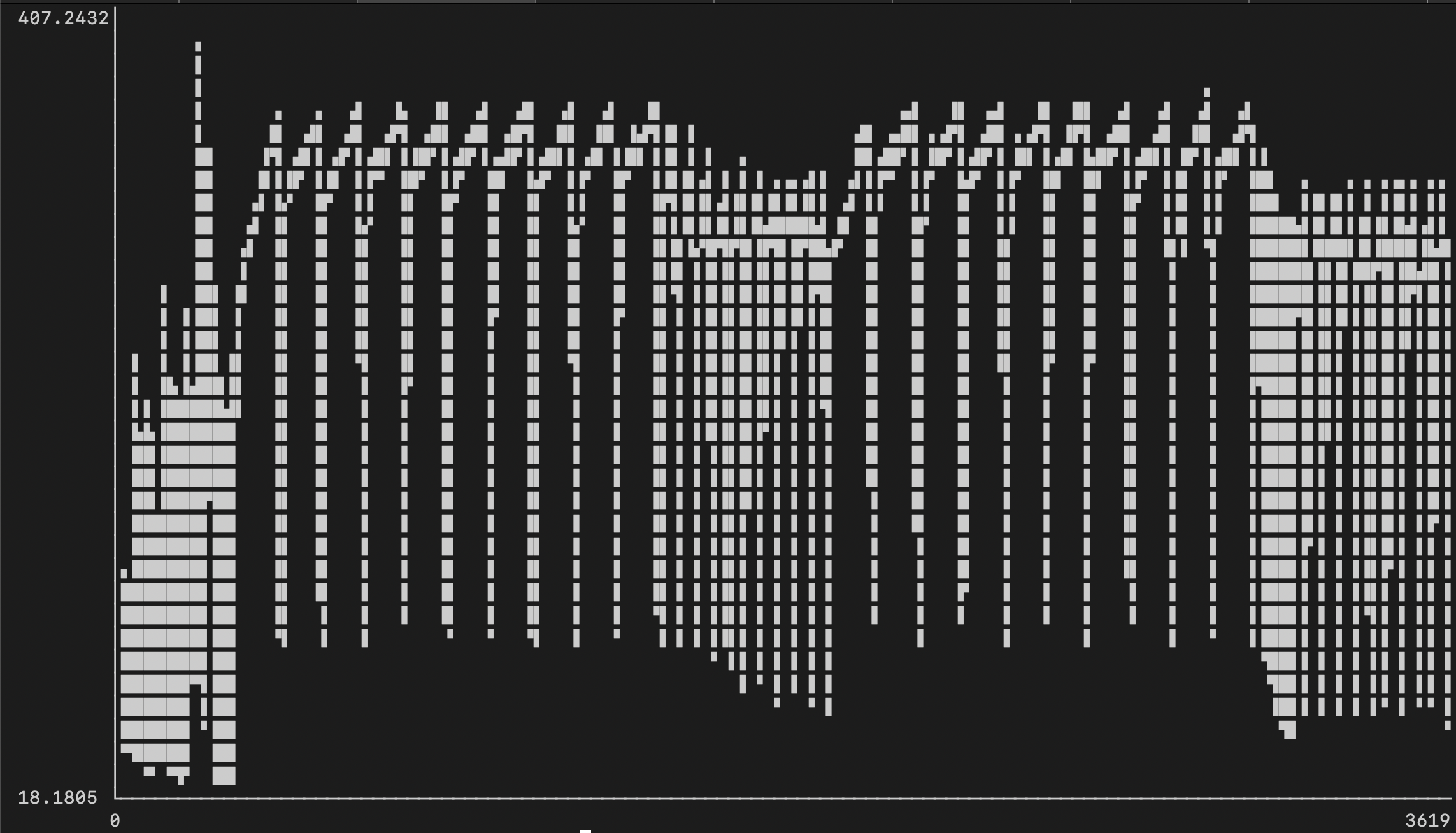 We reran the same exact set of search queries, but a smaller number of times overall (350 queries, instead of 19.9k - which we found to still be a representative enough sample.)

As we can see below, table splitting in general led to a 200-300% improvement in query time for heavier queries that previously took 20-30s, now taking only 7-15s thanks to parallel querying (top chart is before, bottom is after, both in milliseconds): 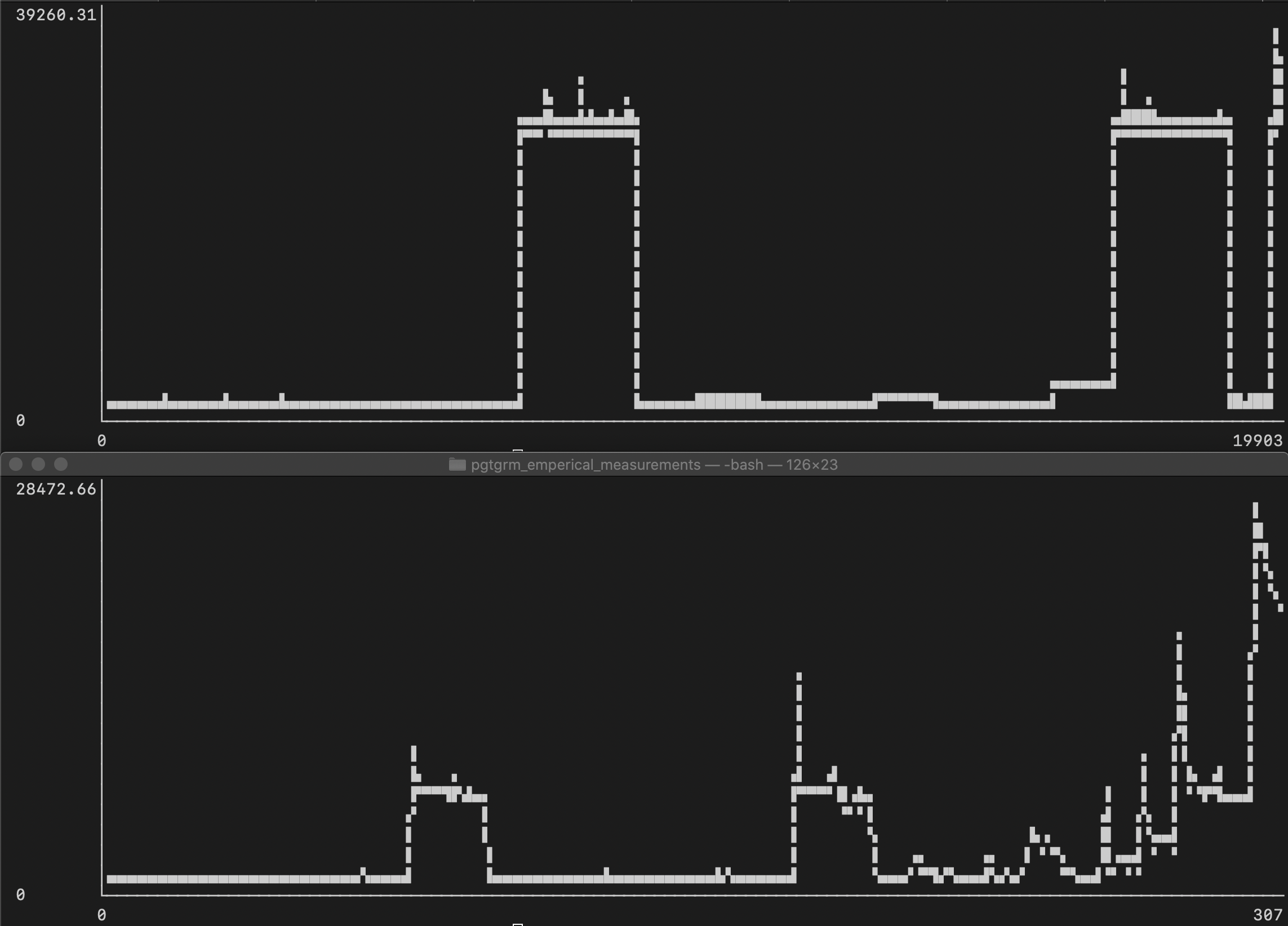 We also grouped queries based on the LIMIT specified in the query and placed them into time buckets (“how many queries completed in under 50ms?") - comparing the two shows that less complex queries and/or queries for fewer results were negatively affected slightly, while larger queries were helped substantially:

In our original article we did not clarify the performance impacts of running Postgres inside of Docker with a volume bind mount. This was raised as a potential source of IO performance difference to us by Thorsten Ball.

We ran all tests above with Postgres in Docker, using a volume bind mount (the osxfs driver, not the experimental FUSE gRPC driver.)

CPU and memory usage was approximately the same as in our Docker Postgres tests.

We anticipated this would be the case as the Macbook does have VT-x virtualization enabled (default on all i7/i9 Macbooks, and confirmed through sysctl kern.hv_support)

Running the statements to split up the large table into multiple smaller ones, i.e.:

Was much faster in native Postgres, taking about 2-8s for each table instead of 20-40s previously, and taking only 15m in total instead of 2h before.

Was also much faster, taking only 23m compared to ~3h with Docker.

Query performance is 12-99% faster, depending on query

We re-ran the same 350 queries as in our earlier table-splitting benchmark, and found the following substantial improvements:

We think the following learnings are most important:

If you are looking for fast regexp or code search today, consider:

Follow this devlog for updates as we continue investigating faster ways to do regexp & ngram search at large scales.