In this multi-part series we’ll build the Entity Component System used in Mach engine in the Zig programming language from first principles (asking what an ECS is and walking through what problems it solves) all the way to writing an implementation in a low-level programming language. The only thing you need to follow along is some programming experience and a desire to learn.

In this article, we’ll mostly go over the problem space, data oriented design, the things we need our ECS to solve, etc. In the next article, implementation will begin. 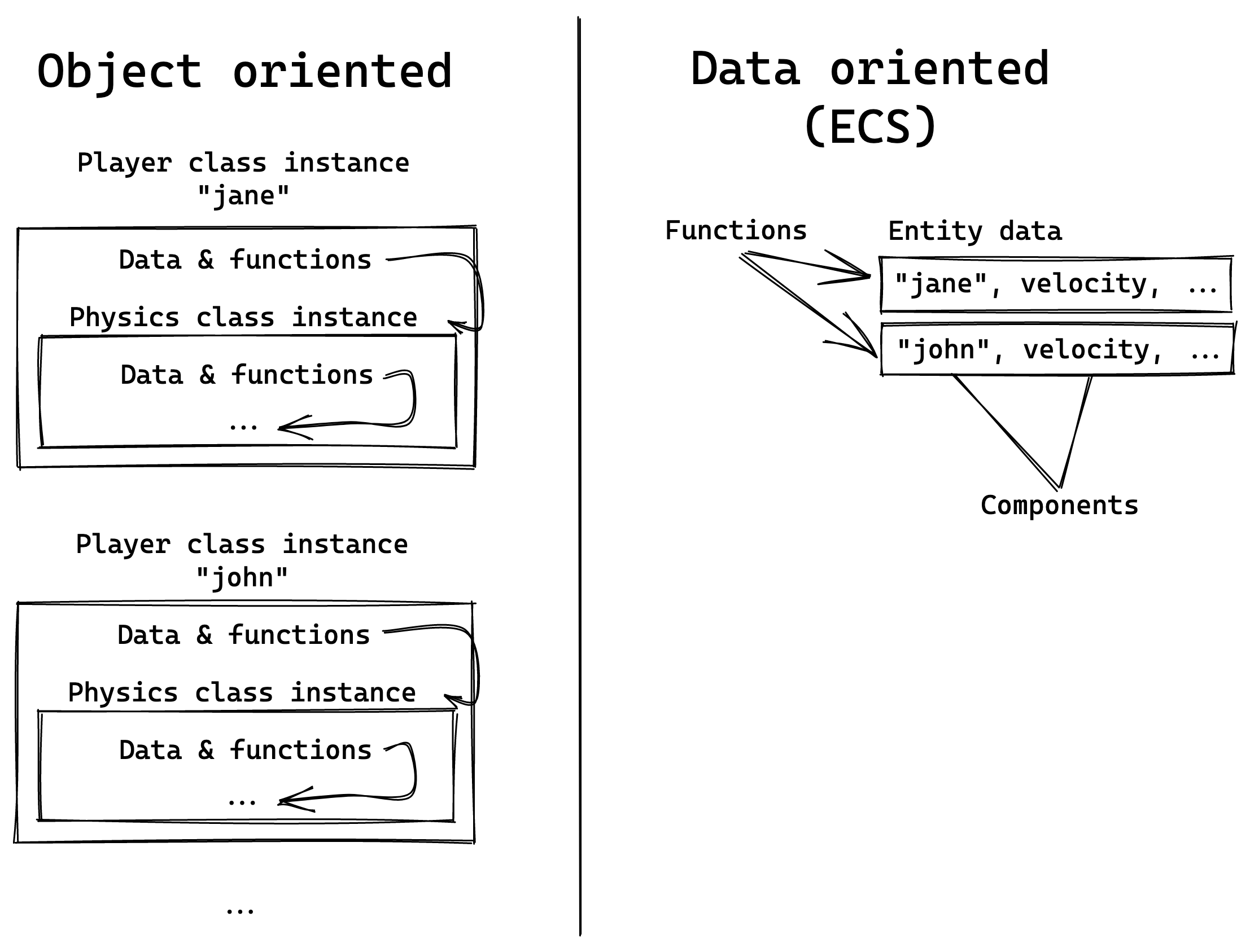 I’ve used and written more traditional OOP scene graphs in the past. These are often the core engine architecture used to represent everything in game worlds: they’re used in Unity historically (which is now migrating to ECS due to popular demand) and even in other modern engines such as Godot.

For Mach engine, however, we’re adopting an ECS as our core architecture. ECS has gained great momentum in recent years for its composition and performance benefits.

My approach to complex software architecture

The key point here is that, personally, I find it useful to intentionally avoid looking directly at code for the implementations themselves.

I’ve used this approach to to great success before: the nice thing about this is that the end result really fits the language, using patterns and features specific to the language - it doesn’t just end up feeling like a port of some other language’s implementation.

I’ve researched a bit about ECS in general, and have chatted with people familiar with ECS, but haven’t read any other’s code. No doubt, initially, I’ll get some aspects wrong! As this series of articles progresses over the coming months, though, you’ll see how this can be a winning tactic as we learn together!

What really is an entity component system, anyway?

I’ve found the Rust project Bevy ECS to have a great succinct explanation, which I further simplify here:

When you hear this, things may start to sounds a whole lot simpler! Those are the core concepts of an ECS.

There is one other concept of an ECS that I think is particularly important: 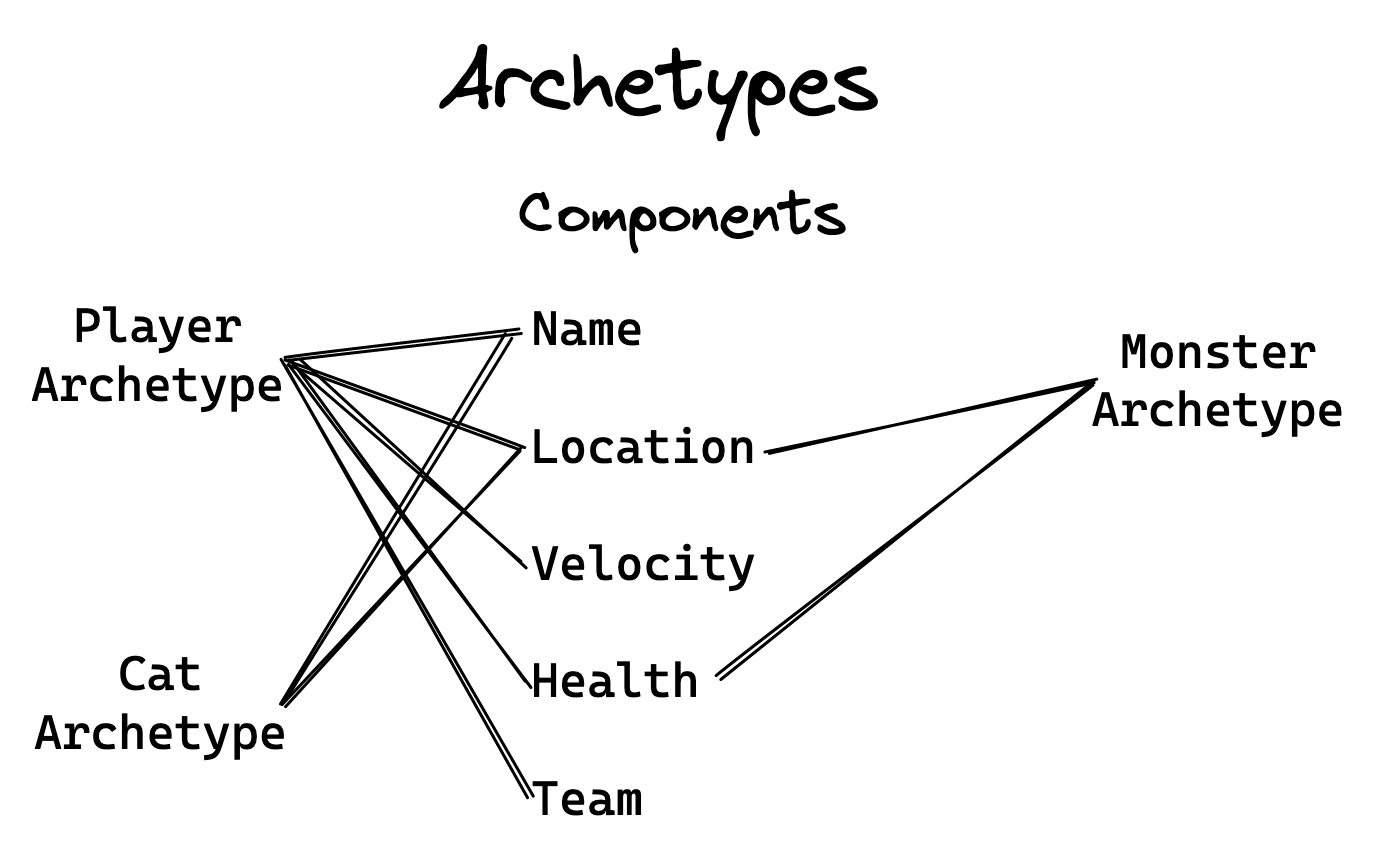 What problems does an ECS solve?

First and foremost is making it easy for game developers to architect their code compared to them doing it manually. If it’s easier for someone to structure their code themselves, manually, then such a system is not useful at all! Of course, as complexity and the scale of software increases then a consistent system is far more useful than a bunch of ad-hoc systems.

The second problem ECS solves, I believe, is making your software architecture efficient without you really having to think too much about it. You don’t have to think about how to structure all your code & data for logic first, and then for performance, but rather get good performance by nature of following patterns. 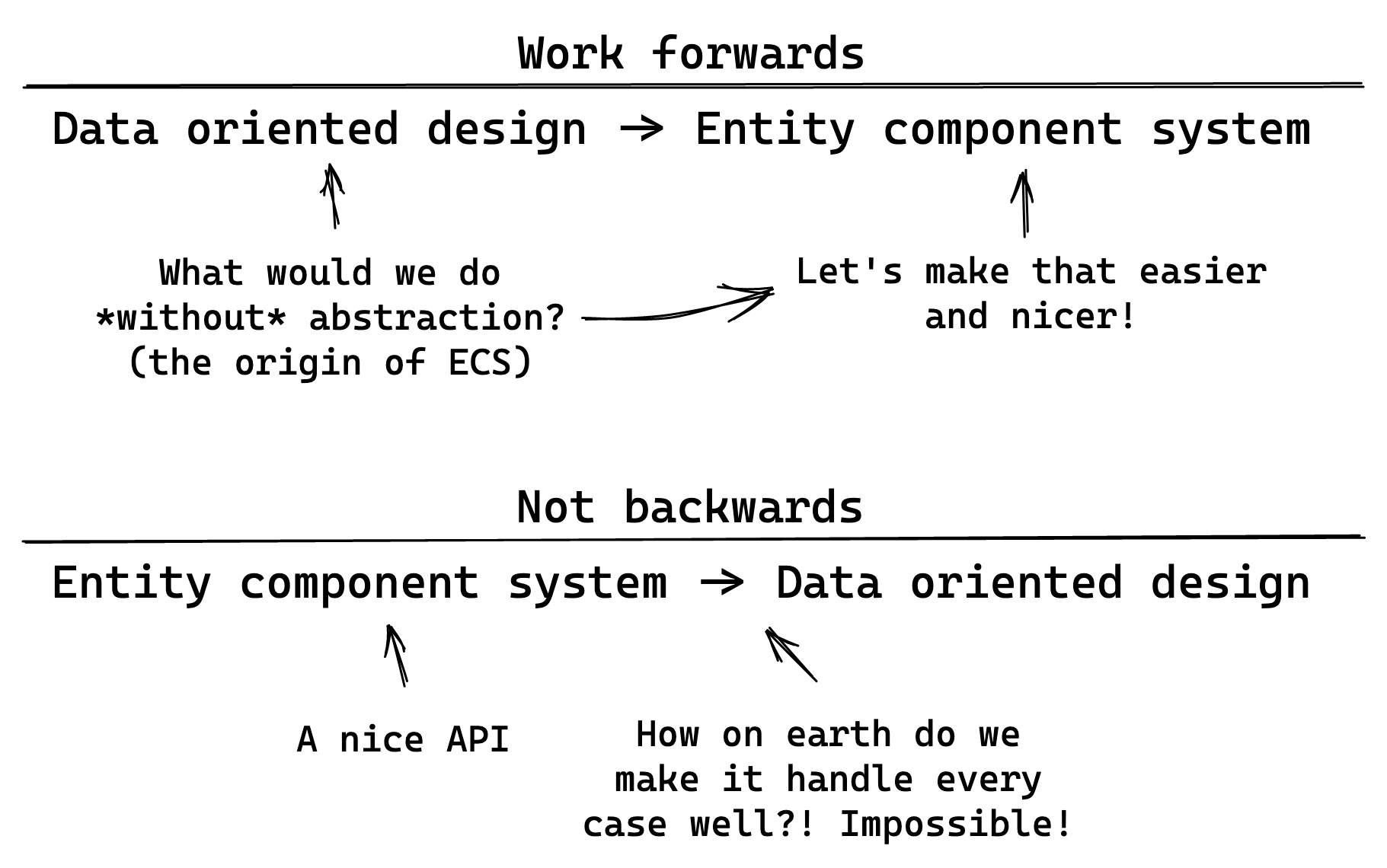 ECS overlaps with data oriented design in many ways (although it’s roots are much earlier). There are many talks about data oriented design including Mike Acton’s at CppCon, and my personal favorite “A Practical Guide to Applying Data-Oriented Design” by Andrew Kelley. You don’t have to watch either, I’ll cover the important concepts we use here. But I highly suggest every developer watch Andrew Kelley’s talk above. It’s eye opening no matter what kind of programming you are doing.

Let’s work forwards, not backwards: We’re not starting by building an ECS, we’re starting by building a proper data oriented design for CPU cache and memory efficiency, and then we’re working towards “how do we make that easier for people to do by default?” and looking to existing ECS architectures for inspiration.

What would data oriented design look like? (code starts here!)

A simple first approach would be something like this:

Now we can refer to players, cats, or monsters by using an entity ID (their index in the array), which we call an entity. We could also write functions (called systems) which iterate over these arrays and e.g. compute physics for players.

However, we can improve this quite a bit!

It’s likely that most players will be alive in our game, only a few will be dead at a time - but yet we’re paying the cost of storing which players are dead for every living player (via the Player.alive struct field)!

We can eliminate paying the cost of alive: bool per player by removing the field entirely, and having what I call compile time sparse data instead:

This not only reduces the amount of memory each Player entity takes up because we no longer store an alive: bool per player, but also it:

This introduces some complexity for us to deal with, though:

Now we start to see one thing our ECS needs to make simpler!

I call this type of data comptime sparse data.

In an ideal world, we’re able to pre-declare all sparse data at compile time like we did above:

But sometimes, this just isn’t possible:

In this case, we could use a hash map:

Now we’ve got a mapping of player Entity IDs -> their nicknames and weapons. We only pay the cost of storing this information for players that do actually have these specialties - not for every player.

I call this type of data runtime sparse data.

Consider our player storage as it stands right now:

In a perfect world, software patents wouldn’t exist. But, in our world, however, Unity makes 20 claims in their software patent covering ECS, including all code we’ve written above to this point. Luckily, as the Bevy authors suggest here entity component systems which store components in separate arrays are not affected by this (this is not legal advice)

Additionally, because of the way structs get laid out in memory with padding, our players array above would end up having a larger memory footprint than needed. So we actually benefit from using a separate array for every type of data (thanks, Unity!):

Luckily, we don’t actually have to enumerate all our fields out like this: Zig has a nice MultiArrayList type which does this for us, we need change only one line:

Not only does this use less memory, it also improves CPU cache efficiency a ton, especially when iterating over a lot of players to do work with them. If you’re curious why, then you should watch Andrew Kelley’s “A Practical Guide to Applying Data-Oriented Design” talk!

Up until now, we’ve assumed we have pre-defined archetypes (“player”, “cat”, “monster”):

This is ideal: we don’t need to ask the computer to do any work to find out where players, cats, or monsters are stored - we just know at compile time because they’re in that variable. When someone uses our ECS, we could have them write a compile time function like:

And that’s great because it means our ECS “world” can be aware ahead of time exactly which archetypes it needs to store. It could write out those var players: ArrayList... variables for us.

I call this comptime archetype storage.

However, real games are much more complex: we might not really know at the time we’re declaring the World all the different archetypes we plan on storing. Code gets messy. In some cases, maybe we even need to define some archetypes of a common type at runtime. For example, if we wanted to allow configuring red and blue here (or the number of teams) via a configuration file on disk or via a GUI:

Of course our Player could have a team field in it to represent the team, but there may be cases where storing a separate list of entities like this is needed without pre-declaring it. If we want to do that, we could use a hashmap:

In this model, we could store the archtype string name as the hashmap key (for example, the @typeName(Player) if we wanted, or maybe a custom name like red, blue, etc.). The value of the hashmap would need to be different types: an ArrayList(Player), an ArrayList(Monster), etc. and so we would store a type-erased *anyopaque (like a C void*) pointer. When we get a value out, we’ll need to “know” what type of ArrayList to cast the pointer back to. It won’t store that info for us.

I call this runtime archetype storage.

We now start to see some of the things our ECS architecture should solve:

Additionally, these are the design principles I’ve come up with:

From this, you can easily gather that storing entities is actually only a small (but critical) portion of this system. In the next article we will get into the details of implementing this in code, and go on to explore more challenging topics like multi-threading, systems, and scheduling in future articles.

Next up: starting our ECS implementation

As this series develops, all the code is being developed in the Mach repository’s ecs subfolder on GitHub. The articles will lag slightly behind.

As more articles come out, you can find them here. Join us in developing it, give us advice, etc. on Matrix chat or follow updates on Twitter.