WebGPU (not to be confused with WebGL) is a modern graphics API, acting as a unified API to the underlying Vulkan/Metal/DirectX APIs. Despite it’s name, it is also designed for use in native applications via its C API.

Dawn is the C++ implementation of WebGPU by Google, used in Chrome, planned to be shipped to millions of browsers in the not too distant future.

6 months ago we released Mach v0.1 which enabled the creation of native applications using WebGPU graphics in Zig:

We do all the heavy-lifting behind the scenes for you: building Dawn using Zig as a C++ compiler, rewriting build scripts in Zig (so you don’t need ninja/cmake/etc), package up all required dependencies so you don’t need Google’s depot_tools, and more.

Because of this, cross-compilation to every major desktop OS is available at the flip of a switch:

But this is old news! We released this 6 months ago-so what’s new since?

The new Zig WebGPU demo showcase has 12+ examples you can try on your own machine to begin learning Zig and WebGPU quickly: 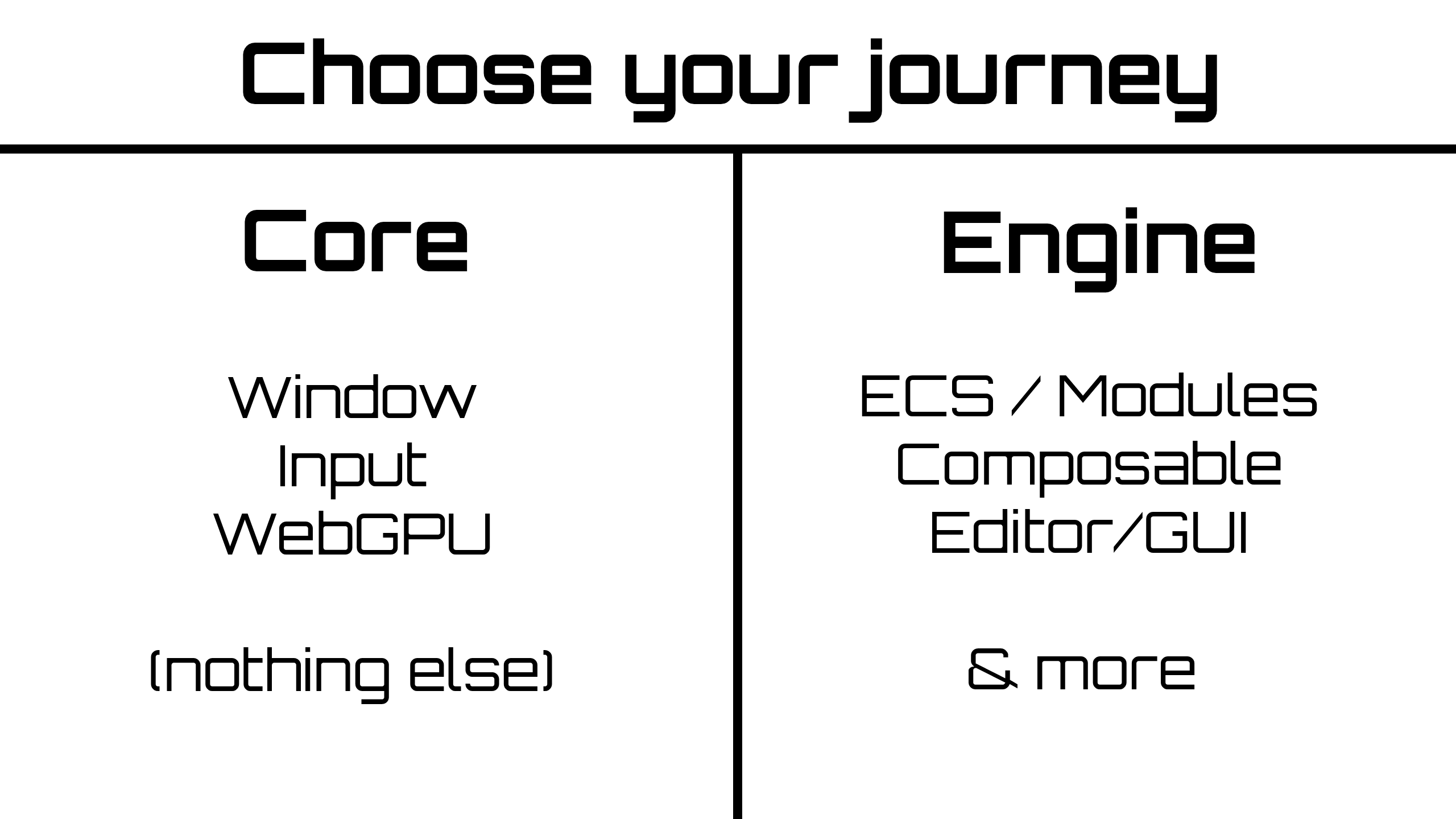 Mach has a choose-your-journey development strategy, where you don’t even have to adopt the entire engine to benefit from it. All the WebGPU examples we provide are Mach core apps: they rely on Mach for window creation, user input, and setting up the WebGPU API - nothing else. Using Mach core, you write your own engine!

Why use this over, say, GLFW and WebGPU on your own? The benefit is that this will work on Desktop, WebAssembly (soon), Mobile (future), and consoles (long term.) You can write Mach core apps in Zig, or other languages via libmach (more on this later.) Think of Mach core as a competitor to SDL/GLFW.

In the future we’ll offer Mach engine apps, where you buy into our ECS, Unity/Unreal-like editor, and other composable building-blocks that make up the engine at your choosing. But this isn’t ready today.

Dawn/WebGPU on the Steam Deck

We believe Linux should be a first-class platform, and because of this we’ve found Mach all Just Works™ right out of the box on the Steam Deck (running natively as a Linux Vulkan application, no DirectX or Proton in the mix.):

A complete rewrite of mach/gpu to be lean & mean

When we wrote the initial WebGPU bindings for Zig 6+ months ago, our primary goal was just to get something working to where we could start building out examples: we always knew we’d need to revisit things later, especially as Browser support, the use of native extensions in Dawn (like bindless support in the future, etc.), overhead & other aspects became clear.

We’ve finally done that revisit in a month-long complete rewrite of mach/gpu from the ground up. This brings 700+ commits, zero-overhead bindings, Dawn native extensions, and much more. Here are the highlights.

In the old mach/gpu, we achieved this by wrapping each WebGPU API object that had methods (like textures, render pass encoders, etc.) in a runtime interface similar to Zig’s std.mem.Allocator interface:

Our thought process was simply to follow any established patterns, learn what didn’t work about it by writing examples, and then revisiting the API later. Even six months ago, though, we knew there were issues with this approach.

The problem: In WebGPU, Descriptor data structures are often passed to methods: these fairly large data structures contain a wide range of options and graphics pipeline state to use, and often involve passing a list of WebGPU objects as a field - or nested field - as part of the Descriptor data structure. Because our Texture involves keeping a ptr (the interface implementation) and a vtable pointer (our implementation methods) it meant that a gpu.Texture was two pointers, while a C WGPUTexture was a single pointer - breaking ABI compatibility.

This meant that our Texture could not simply be passed to a C API expecting a WGPUTexture: instead, we needed to pass our .ptr field only. This had viral effects, though: every Descriptor struct which embedded a Texture needed to be copied/rewritten to convert our two-pointer Texture to a single-pointer WGPUTexture. Worse yet, some descriptors hold dynamic arrays of such objects, requiring us to copy an array to a temporary (and worst-case, heap-allocated), buffer just in order to call the actual WebGPU C API.

Needless to say, this was a cancer we felt we absolutely had to get rid of in the rewrite.

While we want to get rid of runtime interfaces, maintain C ABI compatability, and be zero-overhead-we’d still like to be able to intercept WebGPU API calls if desired, so that we can provide superior debugging facilities in the future.

Zig’s std.mem.Allocator being a runtime interface makes sense because they have different use cases, no existing ABI to remain compatible with, and importantly there are cases where you would want to have multiple allocator implementations in the same program for different purposes.

With WebGPU, we have different constraints: it’s very unlikely to want multiple WebGPU implementations per program. We do need to maintain ABI compatibility. So to address this, we introduce a comptime interface.

Let’s look at the Texture.destroy method from earlier:

Now let’s look at how the comptime interface approach differs:

Firstly, we see that *gpu.Texture is merely an opaque pointer (a C void* if you like), just the same as before. Unlike before, however, there is no vtable pointer: there is only one pointer, it’s passed directly to the implementor via Impl.textureDestroy - and the implementation cannot be changed at runtime.

This solves the issue of ABI compatibility (we have only one pointer now), but we still need to let the user of the library - say from their main.zig file - decide which Implementation of the interface to use.

Traditionally, one might use generics for this (passing an Impl type parameter to each method for example), but we’d rather not pass that around everywhere: after all, we know it will be decided by one user of the API for the entire program, and requiring a type parameter here would have viral effects to every user of the WebGPU API (every API they expose would need that same type parameter.)

Luckily, in Zig there is a trick: from within our WebGPU API we can import the root file of the program (e.g. main.zig). Zig allows this since it lazily evaluates code, so there’s no dependency loop here. So in our mach/gpu package, we can define:

This effectively looks in the user’s main.zig (“root”) file for a declaration like:

Once resolved, our Impl constant is known statically at compile time to be an exact interface implementation of the gpu.Interface: gpu.dawn.Interface in this case, which is just a struct type with functions in it calling the Dawn C API:

The trick here to ensuring that a type actually satisfies the gpu.Interface is that you write a type validator function, which checks if the struct passes to it has the desired methods with matching function signatures:

Best of all, since the interface implementation is completely static and known at comptime, we can enforce every method invocation is inline and we’re not adding any overhead.

One recent development is libmach, which will provide at least a C ABI for the creation of Mach core applications from other languages (think a bit like SDL, but for WebGPU and it works on Desktop, Mobile, WebAssembly & more in the future.)

One thing we’d like to retain, though, is the ability to have such applications get the same nice WebGPU debugging experience in the future, while still using that language’s existing WebGPU bindings. This means instead of calling Dawn’s wgpuTextureDestroy for example, we’d need to call libmach’s wgpuTextureDestroy.

This is where gpu.Export comes in: it merely takes a gpu.Interface struct with all of the Zig functions that implement the WebGPU API, and exports the WebGPU C ABI for them:

From this, you might notice something important: We’ve maintained 100% C ABI compatability in the new mach/gpu rewrite. Every data structure is ABI compatible with Dawn’s webgpu.h header.

One nice property of Zig is it’s packed structs. For example, in C there is a WGPUColorWriteMaskFlags type which is a uint32_t where the first four bits represent a color write mask for red, green, blue, and alpha respectively. The remaining 28 bits are unused at present. 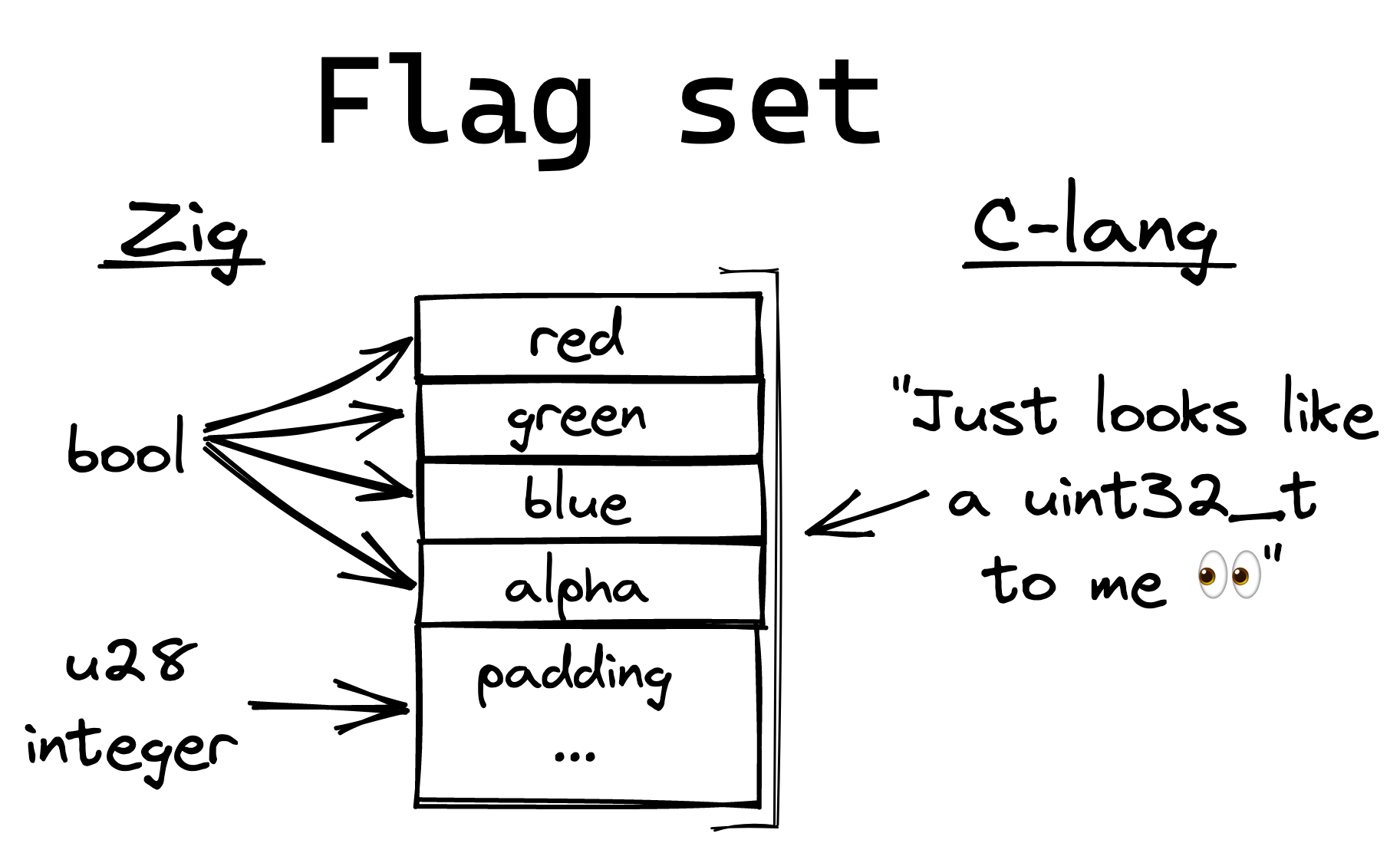 Interacting with WGPUColorWriteMaskFlags in C can be a bit cumbersome: you need to make sure you remember the right bit masking operations to set bits, check if they are set, and so on.

In Zig, we have packed struct in which bool is just one bit - and we have integers of any bit width we desire. We can use this to compose a 32-bit data structure compatible with the C ABI variant, but using nice bools to represent those first four bits:

This is nice because now one can simply check if (write_mask.red and write_mask.blue) for example, or simply pass it as a parameter to a function like ColorWriteMaskFlags{.red = true, .blue = true}.

One not-so-friendly aspect of webgpu.h (the C API for WebGPU) is that it allows for arbitrary extension of the API via so-called chaining. For example, let’s look at a descriptor struct used as the parameters to create a shader module from its text source code:

Here you can obviously see there is a label for the shader module - but where does our shader source code go? It’s not clear. And what goes in that nextInChain field? It looks like this:

Effectively, WebGPU implementations can take arbitrary data structures via this chaining process - as extensions to the WebGPU API for example - so long as the chained struct begins with these ABI-compatible fields.

For example-to construct a shader in Zig, you might write:

That’s pretty nasty! Also take note of how nextInChain needs to be cast to the WGPUChainedStruct pointer type, only the sType field identifies it (the C type system can’t.)

More importantly: because nextInChain is an opaque type, you can’t really know what type of pointer is legal at all to give to the API in a nextInChain field. Oof!

Needless to say, we didn’t want to adopt this lack of type safety (and lack of documentation), so we worked with the Dawn developers at Google to add documentation about what structs are legal where, and then in Zig we used this information to replace next_in_chain fields with a union of pointers so it’s type safe (for all known structs) and self-documenting. Our example from before becomes just:

It may not seem much more readable, but all of the type system info is there to protect you and that’s what counts. Of course, we also added a helper to create WGSL shader modules so this ends up being truly clean:

Out of the box, Dawn needed a little love to be compiled with Zig as the C/C++ compiled - so we’ve contributed patches upstream for this:

There were many other obvious improvements we won’t enumerate in detail here:

As with all standalone Mach libraries that reach a certain level of maturity, mach/gpu is now available in it’s own standalone repository with an example using it with GLFW: https://github.com/hexops/mach-gpu

I’d say we’re well on our way to having a perfect WebGPU/Dawn API for Zig, but we do have a little ways to go. Things coming up include:

We’re continuing to work towards the Mach v0.2 release otherwise (special thanks for all those contributing to Mach today!) 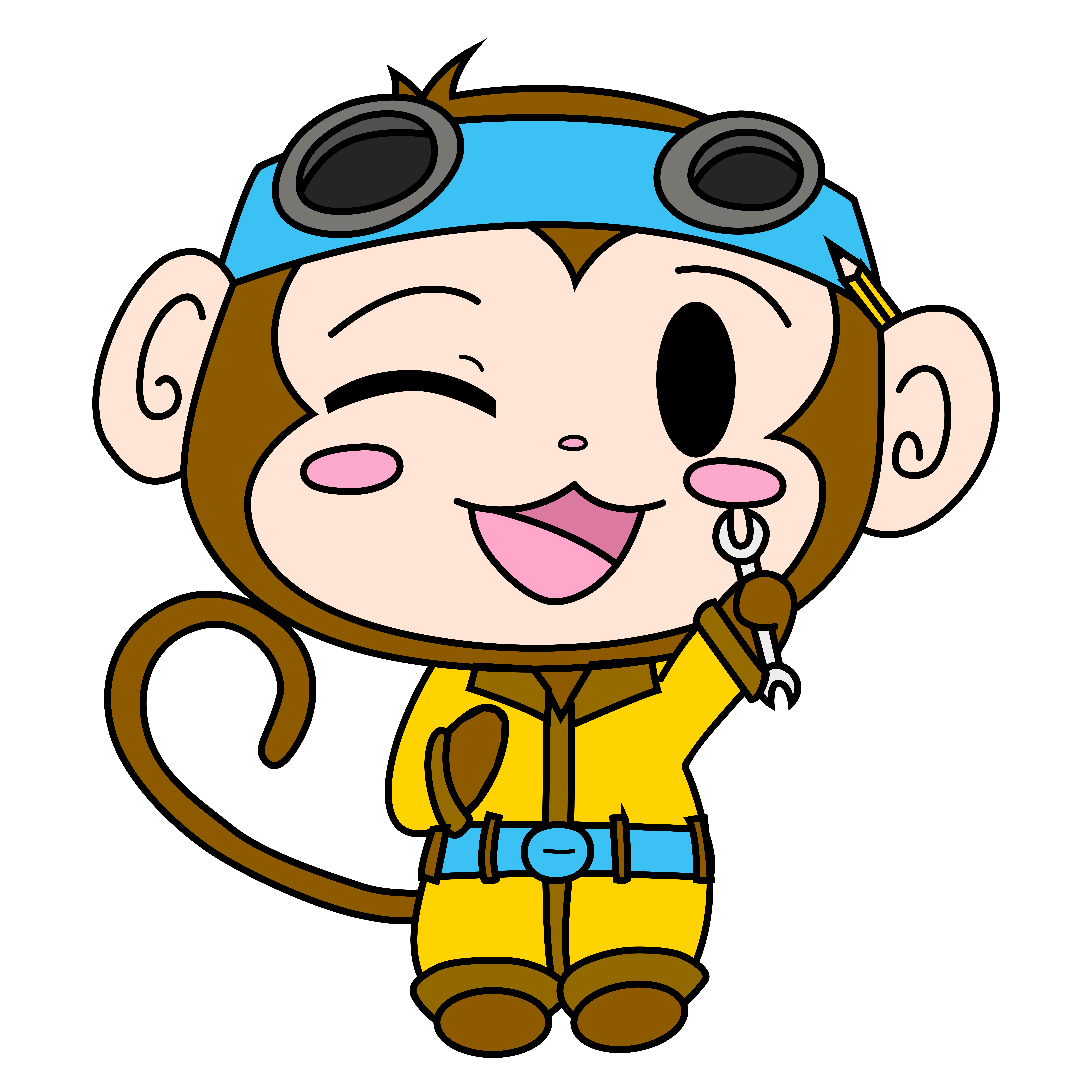